May the Sun Set // Dennis’ Evolution X on TE37SL

I wake up everyday finding myself checking out latest posts from Jalopnik, Speedhunters, Canibeat and StanceNation. Daily updates from these sites have pretty much given me the latest info on new car releases, the hottest wheels in the scenes and most recent automotive events around the world. Years after years have passed with such a routine and sometimes things are becoming more and more familiar and predictable. The Germans have just introduced their new model that’s astonishingly 0.1s faster than its predecessor, with more passenger space and better fuel economy. The 2013 edition of an autoshow is bigger than ever, attracting crowds from nearby cities. A new concave forged wheel company has just been launched in USA. Guys in the aggressive fitment scenes are showcasing lower offset wheels with greater amount of camber, plus lower ride height. Italian exotics company has just sold the last unit of its limited production supercar, with a price tag exceeding the price of a small island in Asia. Sometimes these all feel like a roller coaster ride that’s circling around its own track. Ups downs. Ups downs. But in the end they’re same old stories. Despite these facts, I still am finding myself checking out those sites daily and I don’t think I’m being the only one. 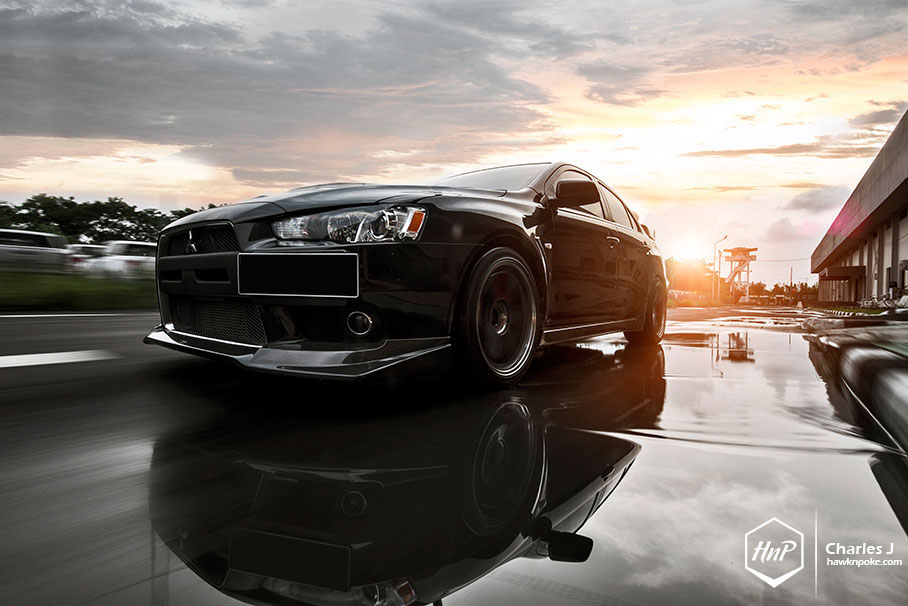 Perhaps it’s the thirst us gearheads has for the latest and coolest new car techs. Perhaps it’s our constant search for inspirations as to what-to-do-next to our car builds. Perhaps its our nature of wanting to socialize and interact with like minded folks on the web. Whatever it is, I believe our passion for cars and builds have simply fueled our curiosity, our constant urge for innovations and creativity. Speaking of passion and creativity, let me introduce you to Dennis, owner of this well built Evolution X we are featuring today, who is very much passionate towards the Evolution lineup. 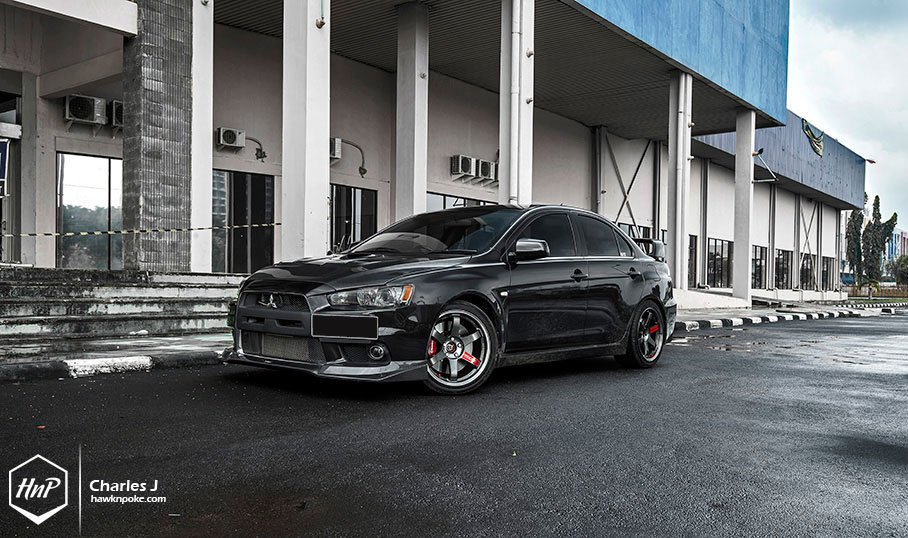 Dennis has been a huge fan of the Evolution ever since he was in Junior high, which dated back to the days of Evolution 8. However, it wasn’t until two years ago that he has managed to get his hands on this black Evolution X. What a dream-come-true for Dennis; he then started his project focusing on engine modifications. Plentiful of Blitz parts filled the mod list of his ride, reflecting his desires for speed and excitement. 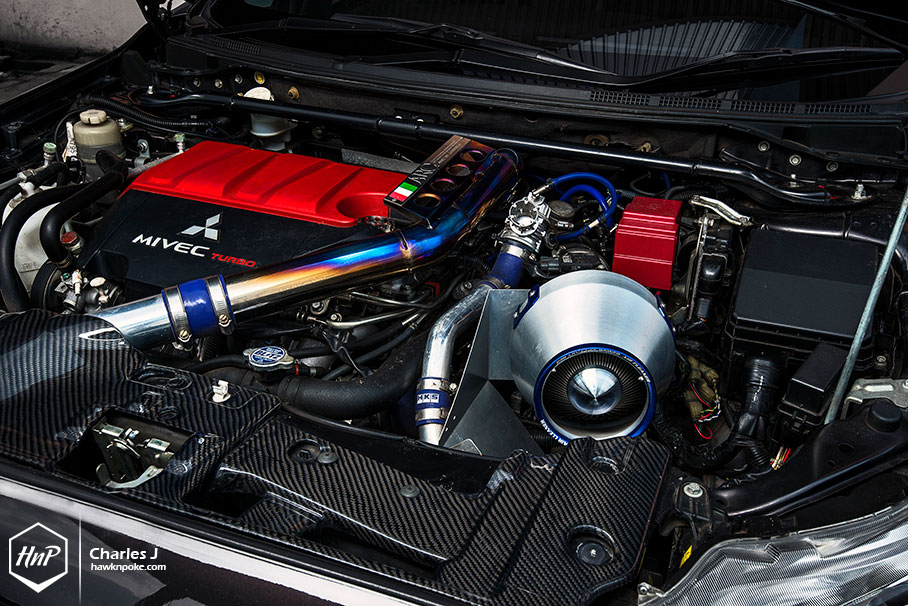 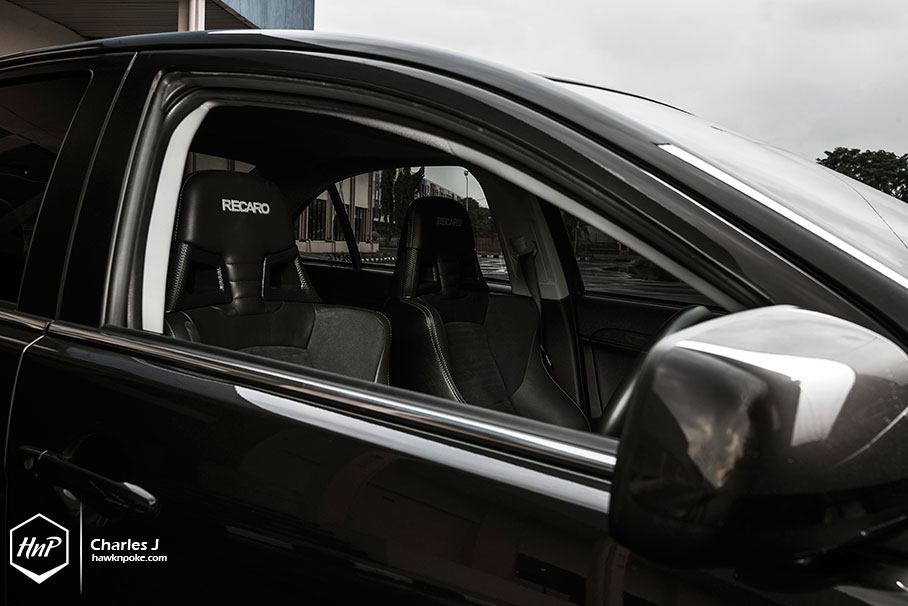 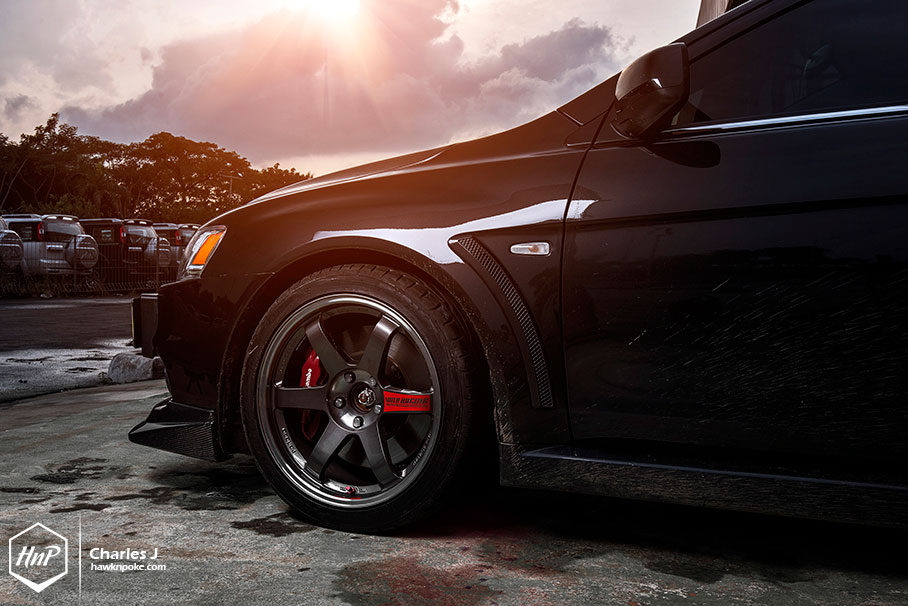 Instead of bolting on all parts immediately upon receiving the car, Dennis chose a more progressive build for the car. It took him two years to get the car to its current state. Sourcing for quality and sometimes rare parts proved not to be an easy task. Take the exhaust for example, he admitted that it is quite possibly be the one and only quad Blitz Nur-Spec for Evo X in this whole country. 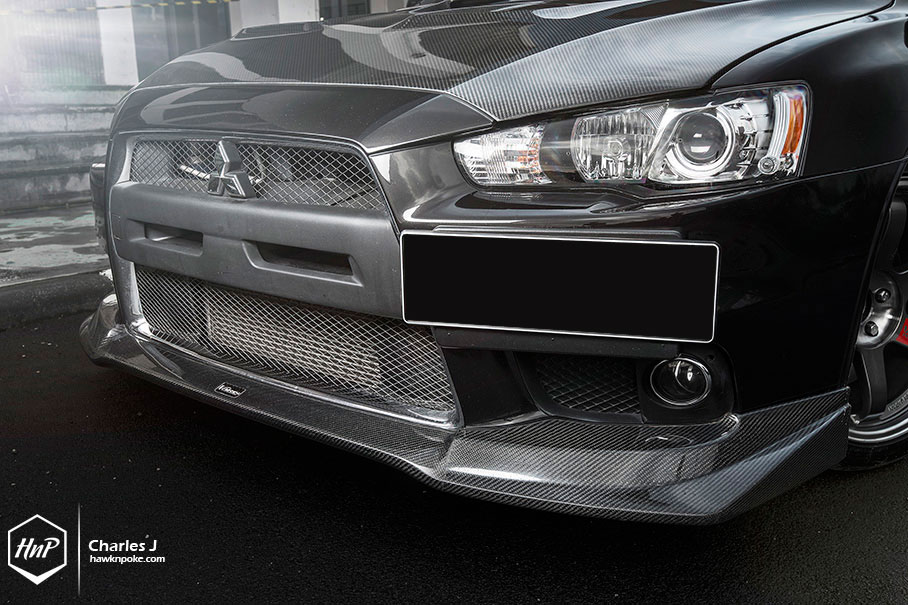 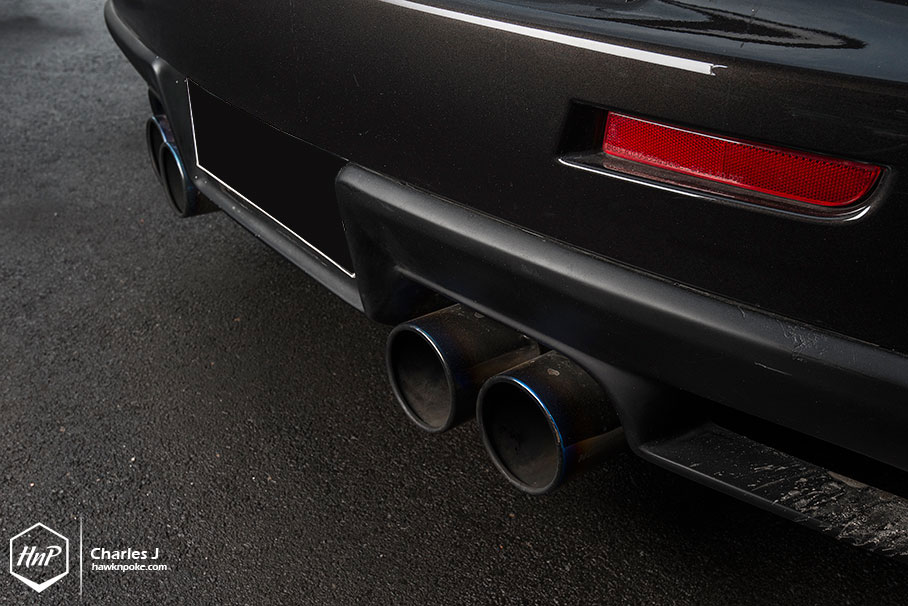 Car builds aren’t always about making friends with new car parts either; sometimes it can require the exact opposite: goodbyes. These TE37SL wheels you’re looking at have actually found a new home, along with the quad exhaust. As hard as a goodbye can be, it’s the only path Dennis can take to make ways for new parts that he’s expecting. Just like the car scenes these days; stories and news may come and go all the time, but its the constant passion that excels us further to greater heights. The sun may set, but a new dawn of tomorrow will always come. 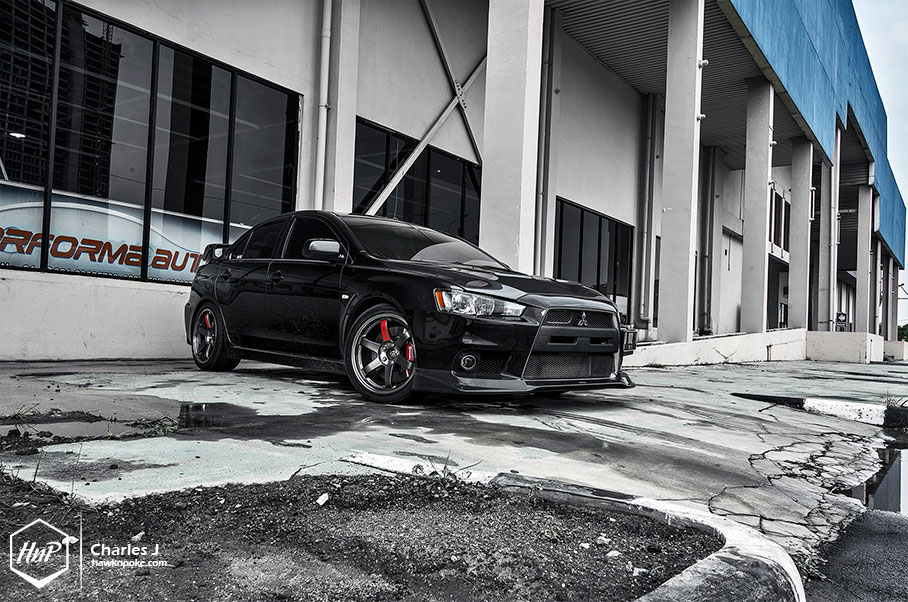 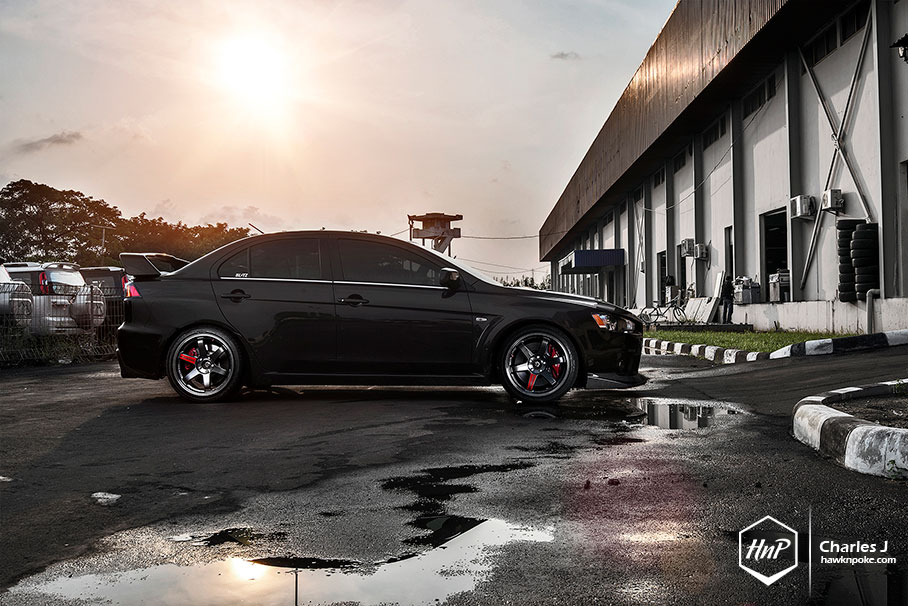 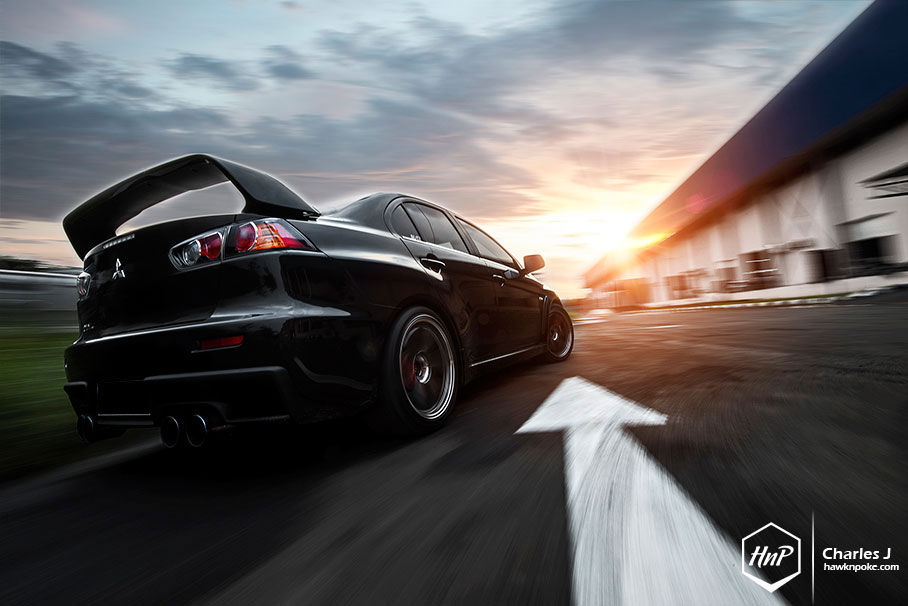