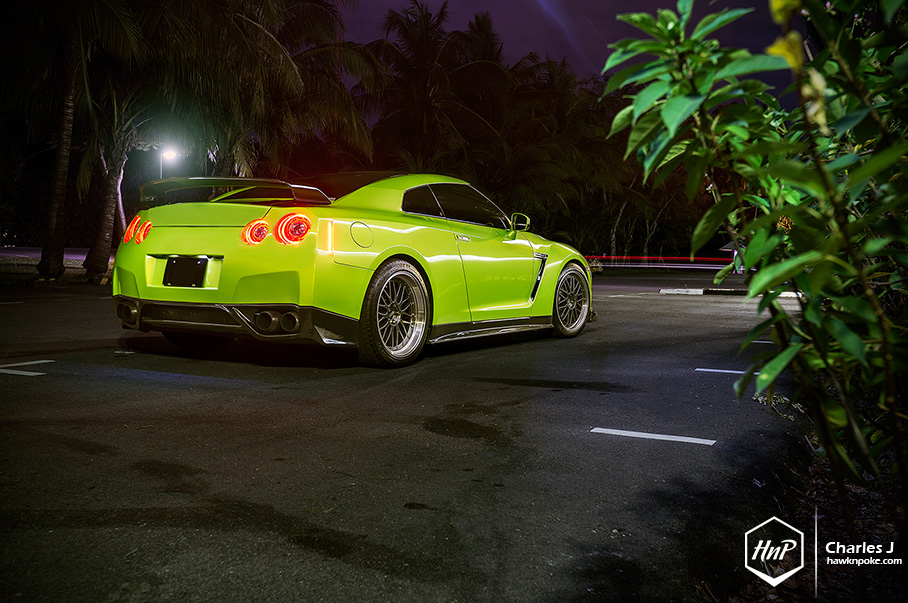 Undoubtedly hard to get off the heat; the urge to add more and more quality parts into the project cars we have. New products arrive every once in a while, and people elsewhere are pushing boundaries with their latest and better setups. Inspiring us even more. It’s a race for an evolution; our impulse to implement better and superior products in every aspects we touched. In the aftermarket scene, this often relates to building faster, more aggressive machines with every modification stage we get into. And what better choices are there, other than the GT-R, when it comes to unleashing almost-unlimited tuning potentials. 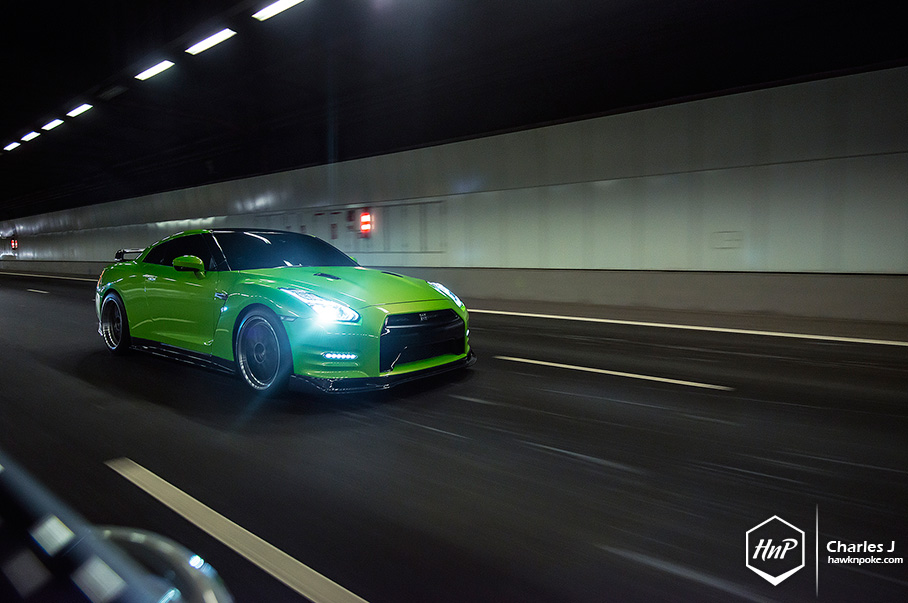 Designed to be fast. Built to box the mightier beasts. GT-R’s trait for uncompromising performance dated back to its predecessor from the 1970s. A flagship to Nissan’s racing expertise; a street coupe to tame the circuits. It’s the one model which has continuously trailed the latest supercars through each and every generation Nissan introduced. This 6th generation, especially, has been built ground up not using Nissan’s sedan DNA, but instead a specifically-formulated race-car DNA. 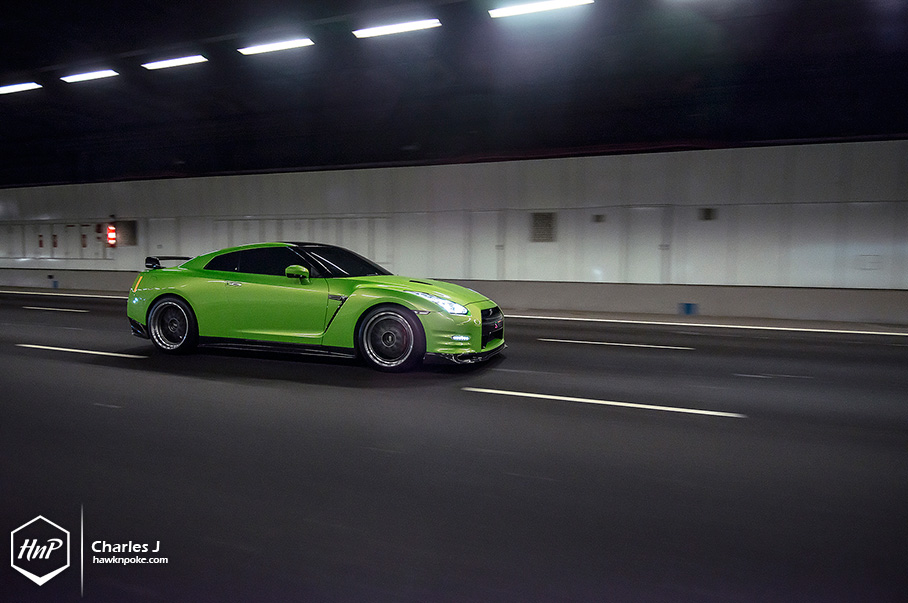 There’s no longer a Skyline and a Skyline GT-R. It’s only GT-R from now on. A three-letter diorama that reflects Nissan’s pursue for everything fast and exciting, leaving the entire ‘Skyline’ sedan family behind. The result? A no-strings-attached contract killer which always does exactly what it’s been instructed to do; no drama, no hesitations, only precise, potent actions. 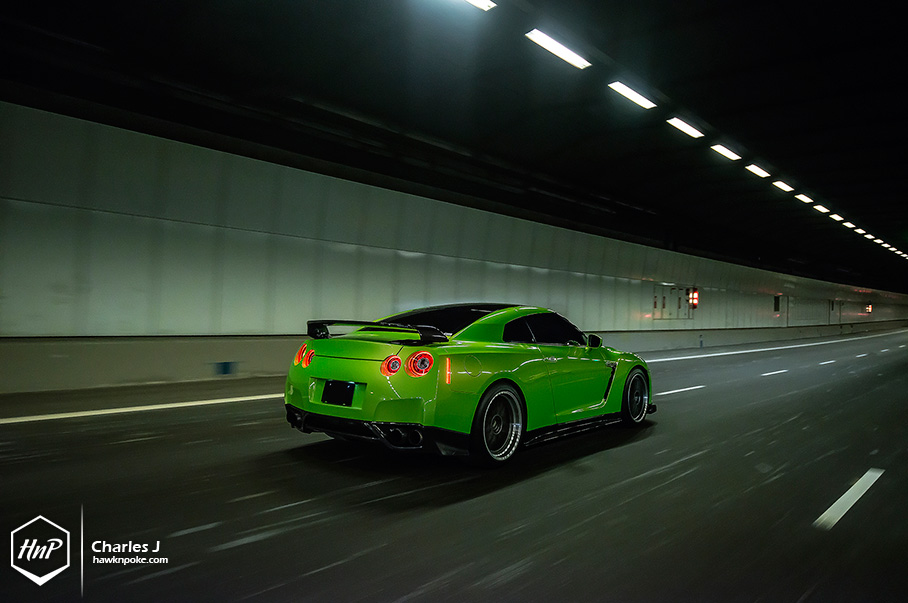 And, boy, what a limitless potential the GT-R has. Upon picking up the beast off its factory floor, you’d be more than welcome by the endless number of aftermarket tuning discussions available online and offline. From straight-forward ECU remap options to full-blown four-digit-horsepower upgrades. All made possible thanks to the GT-R’s robust engine and chassis designs. 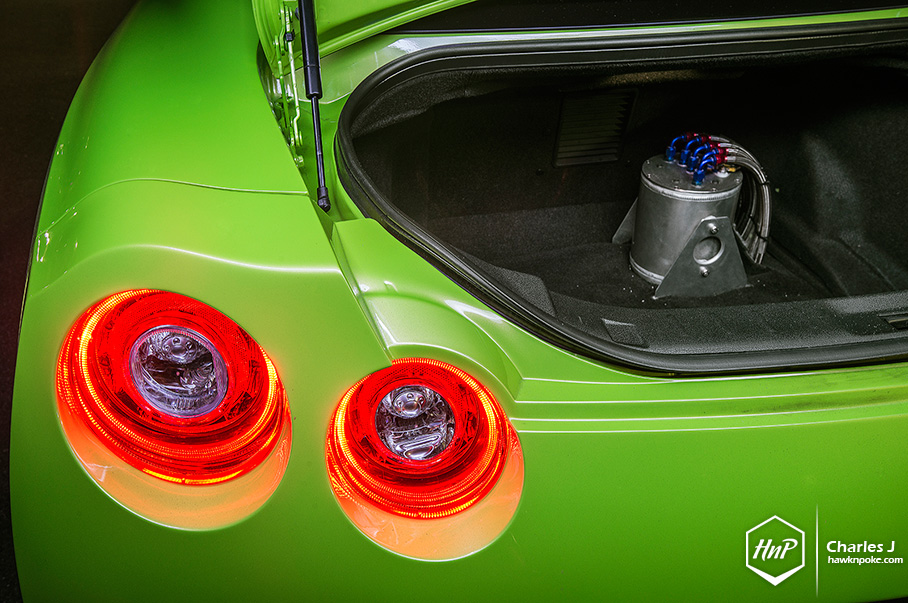 Spend a little more time in the community and you’ll be faced by stunningly-good-looking tuned GT-R’s from all over the world. From its birth place in Japan to US to UAE, the GT-R has made the entire globe its tuning playground. A worldwide phenomenon; a huge success. Which leads us up to this strikingly different green GT-R we met in Singapore. Yes, the tiny island which packs some of the most interesting cars in Southeast Asia. 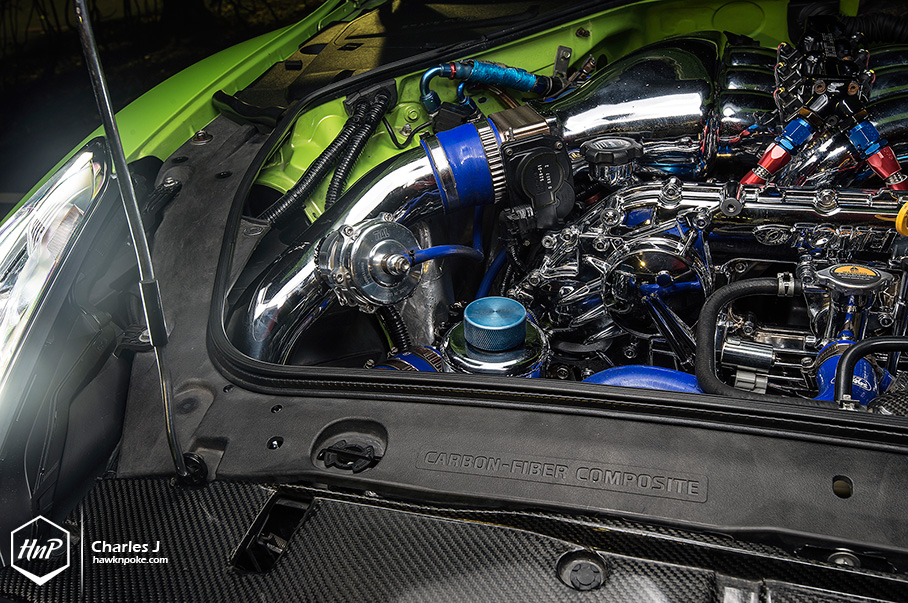 There’s absolutely more than what meets the eyes. At a glance, its Lamborghini green paint might be the only spectrum you’re most attracted to, but you should really prepare yourselves for what’s residing underneath the bonnet. 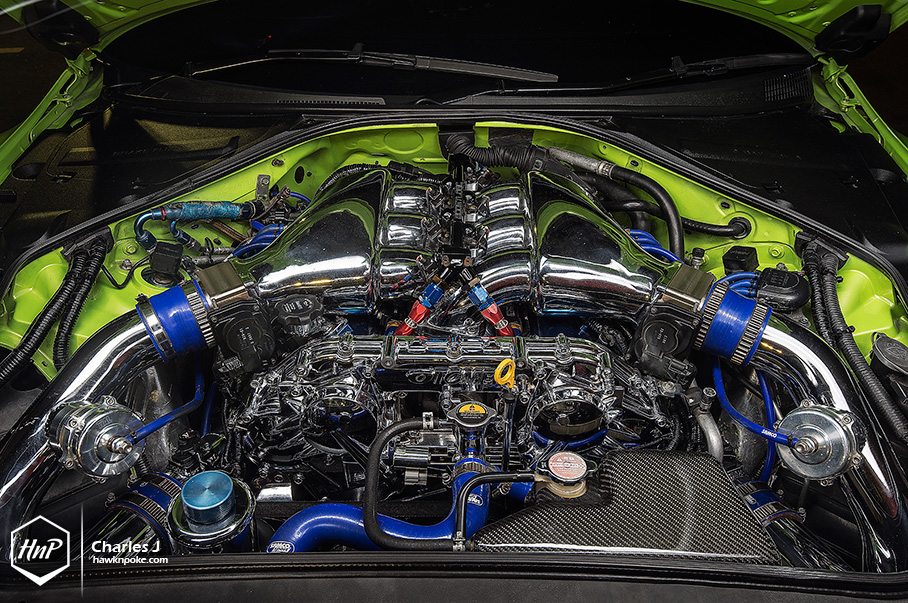 Nothing less than a built VR38DETT complete with forged internals and GT30 turbocharger upgrades. Supplemented by the beefed up fuel lines, transmission and air flow systems, such a setup has essentially given the GT-R an entirely stronger, sharper pair of fangs capable of ripping apart most other cars it finds on the streets. 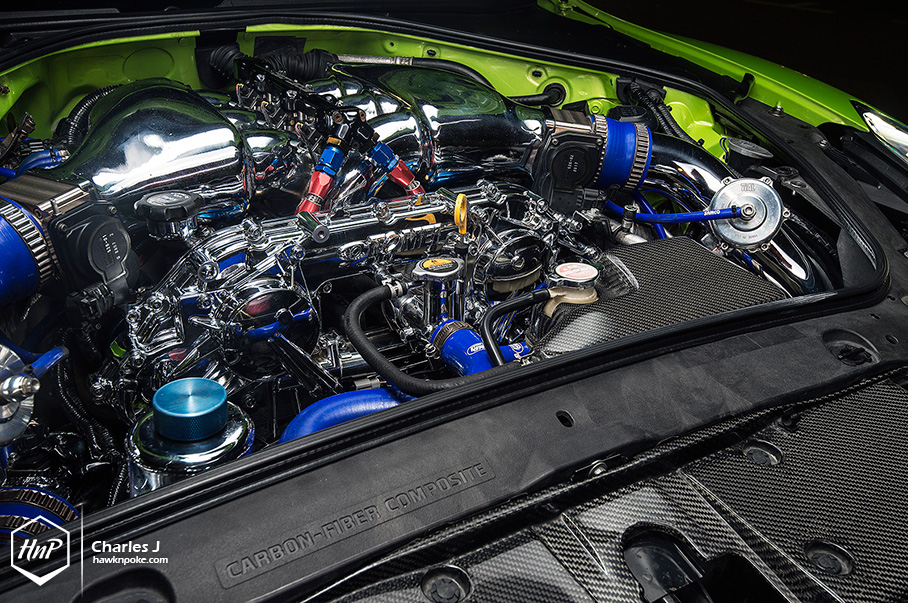 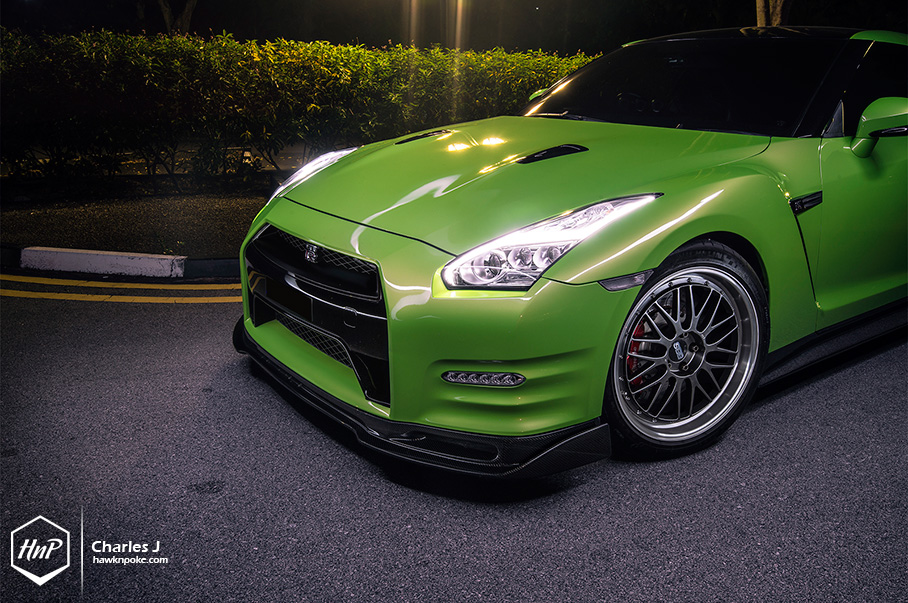 Footworks wise, the owner has also settled for everything no-less than outstanding. Limited-edition forged BBS LM GT-R in 20-inch diameters ensures proper delivery of its horsepower outputs onto the asphalts, firmly supported by sticky Michelin Pilot Super Sports tires. The kind of tires which often come as OEM supplies for many modern supercars. 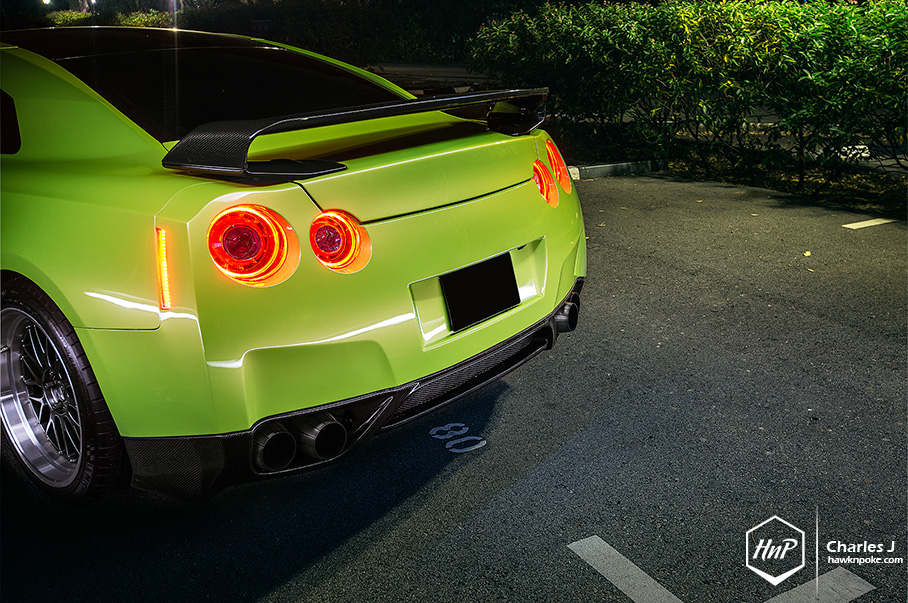 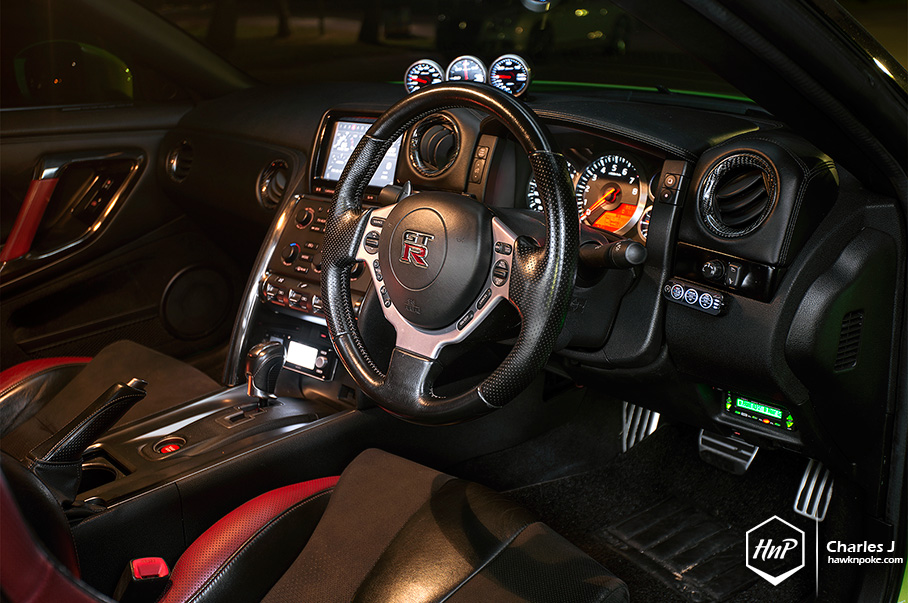 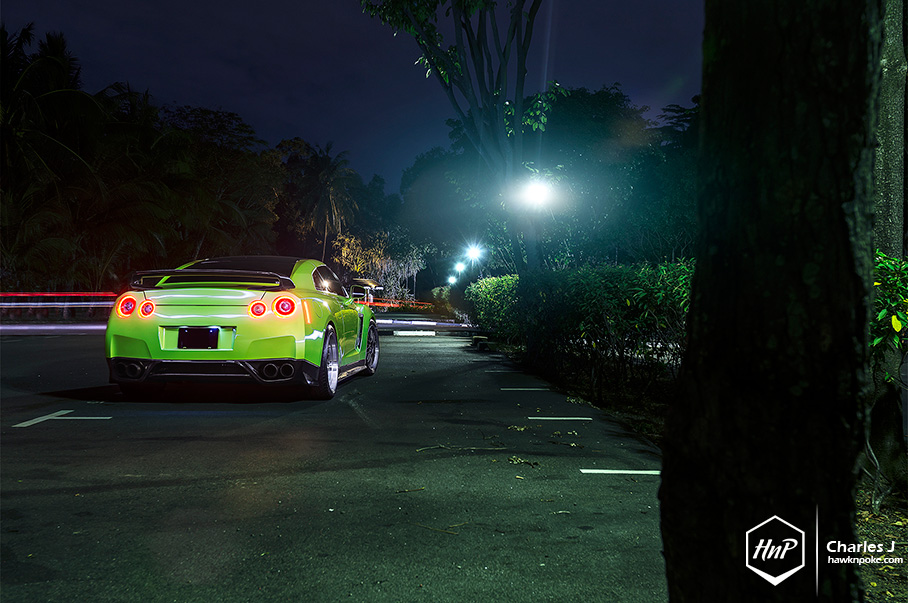