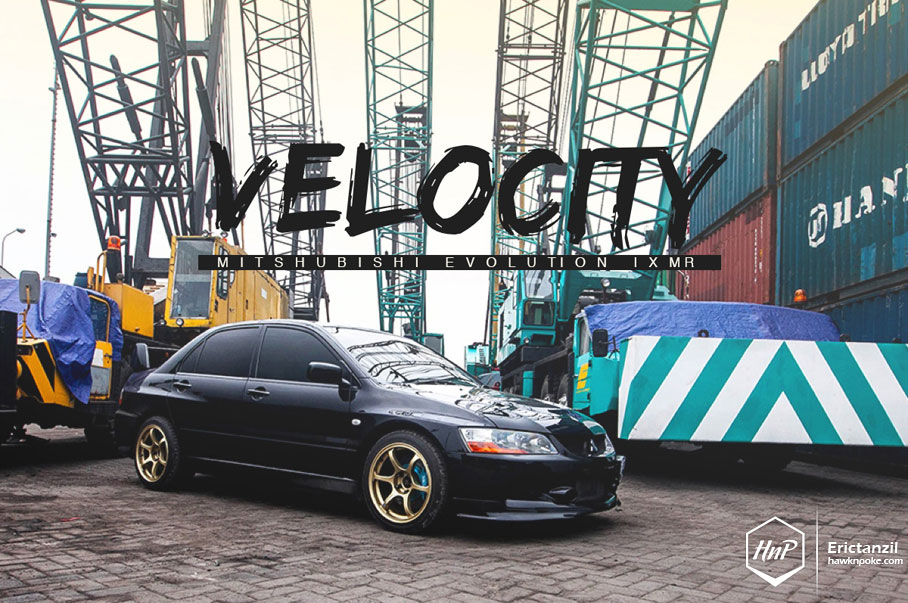 These days two things are definitely true in our car culture. 1) Money can’t buy taste. 2) Money can’t even always buy you the cars. Take today’s case of the Lancer Evolution IX MR as an example. I was quite surprised finding out that the second-hand prices of these older gen Evo’s are comparable to that of the Evo X. Yes, these older, more mechanical, rougher Evolution’s seem to have a larger fan base compared to the modern Evo X. And actually you’d be pretty lucky if you can even find prices being tagged to one of these gems, because most of the time you can’t even find them floating around in the market. Long story short, let me introduce you to our lucky-guy of the day, Mr F, whose Evolution IX MR from Surabaya is truly one of the greatest rare gems out there. 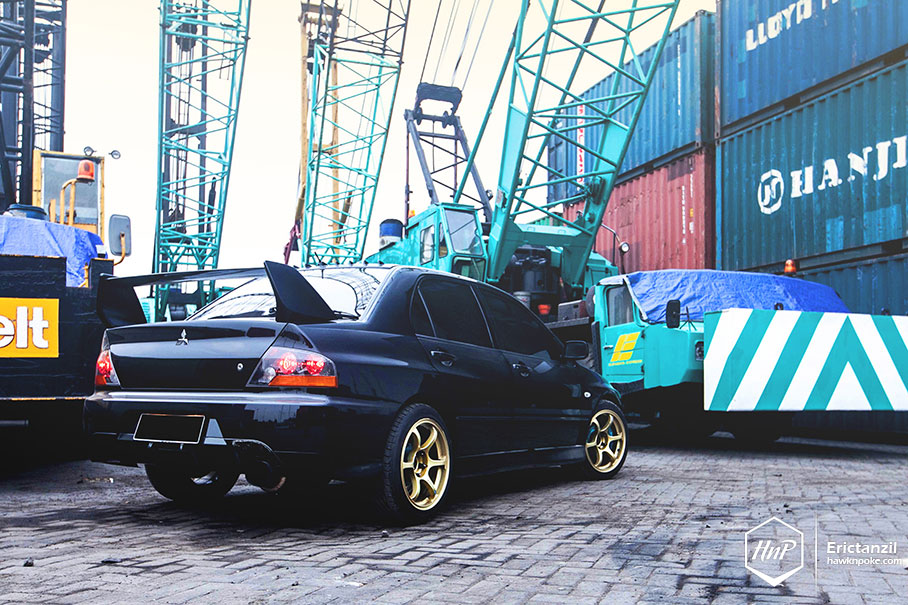 MR, which stands for Mitsubishi Racing, is Evolution’s top-of-the-line model. Sporting lighter body panels and the famous vortex generator on the roof, alongside a plenty of other premium equipments. Only a few of this breed has ever arrived in Indonesia and the chance of importing another one from overseas is pretty much nil, due to the country’s second-hand cars import ban. You might’ve also noticed that we’ve featured quite several of the MR’s on our site, from the one in Palembang to the one which is often spotted at the Excess Motoring Garage (STI LOL VIII MR), but both are Evo VIII, while Mr F’s is an IX. A generation newer, equipped with even more power off the factory floor. 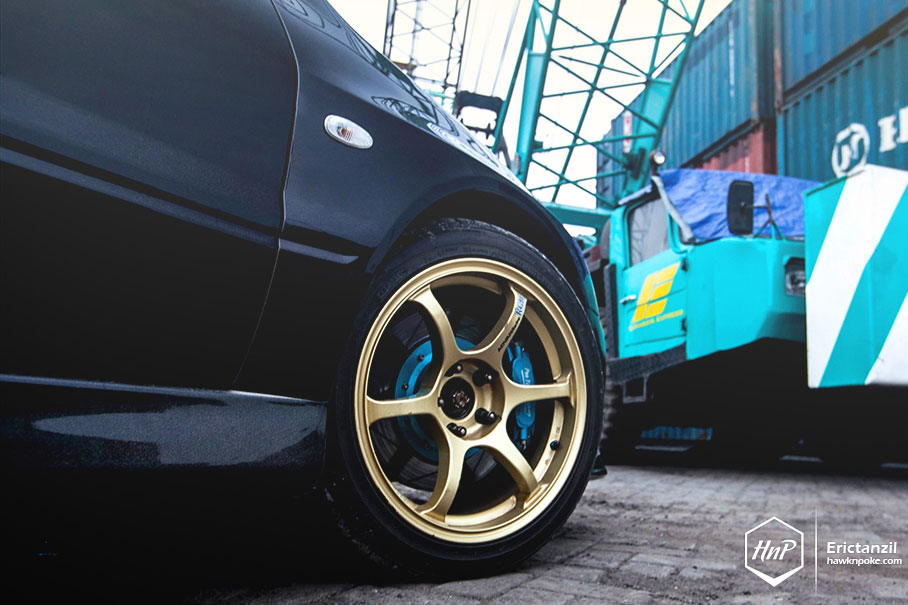 When a car becomes so special and sought-after in the market, it deserves to be modded properly too. How often are you finding RX8’s being modded so disrespectfully? Lambo doors, flamboyant stickers plus the all-too-often rice-y stuffs. Fortunately such an occurrence is pretty rare to be found in the Evolution family. Larger turbos, better brakes, stronger gearboxes, lightweight wheels are amongst the most common mods found in these Evolutions. A hint to the owners’ pursue for speed and function over everything else. 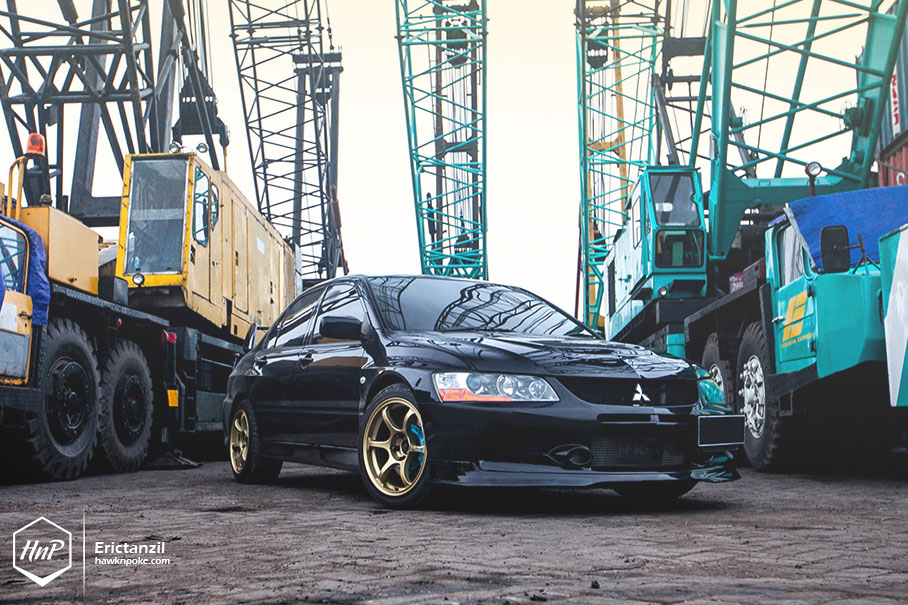 Mr F has had a long history in being a GT-R fan. In fact he’s been keeping a pair of those hidden in his garage (features coming up soon). So how can he be interested in the Evolution too? Despite having no V6 engine and cocooned in a humble-looking four-door body, Mr F fell for the Evolution the moment he took a ride in it. It was 1.5 years ago that a friend of his offered him this collectible to add to his JDM collection. A bit wary at first, but undeniably excited afterwards. Such a rare, good condition IX MR was simply the purchase he couldn’t resist. 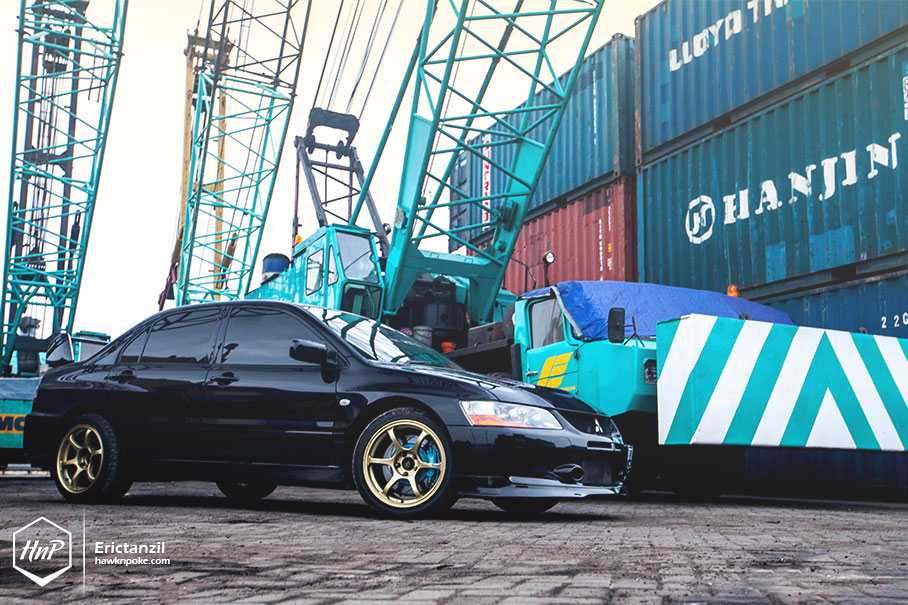 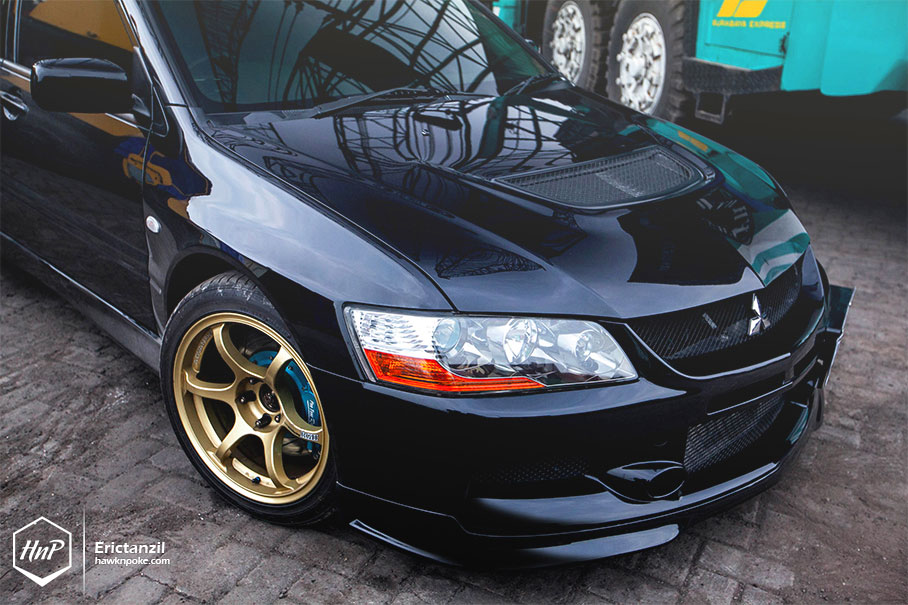 Mr F likes to keep the exterior areas as stock-looking as possible. Despite all the major engine mods (from HKS 3037S turbo to Tomei Ti exhaust), he prefers to keep the Evo IX MR looking as OEM as possible. Only cues to all the horsepowers under the hood are those huge Protune brakes and lightweight Advan’s. 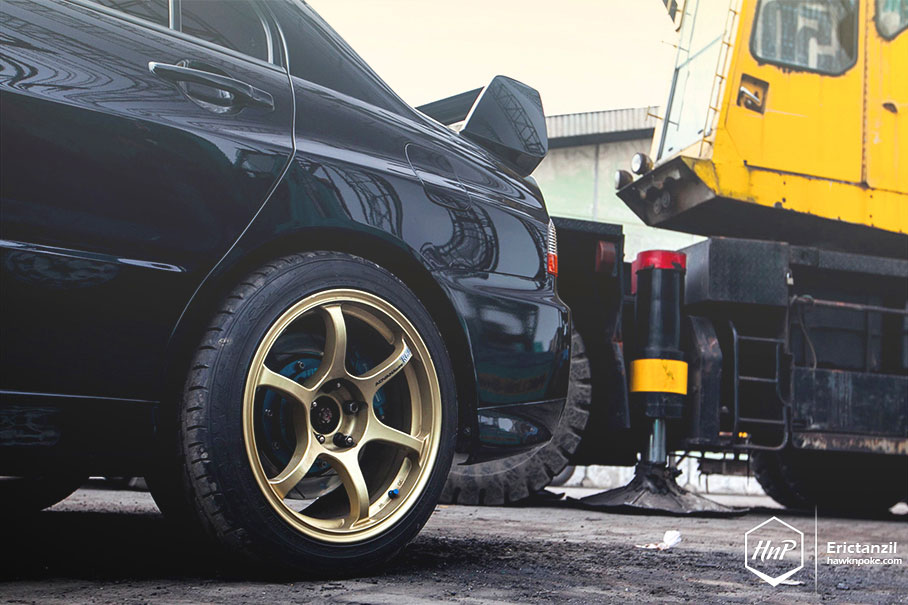 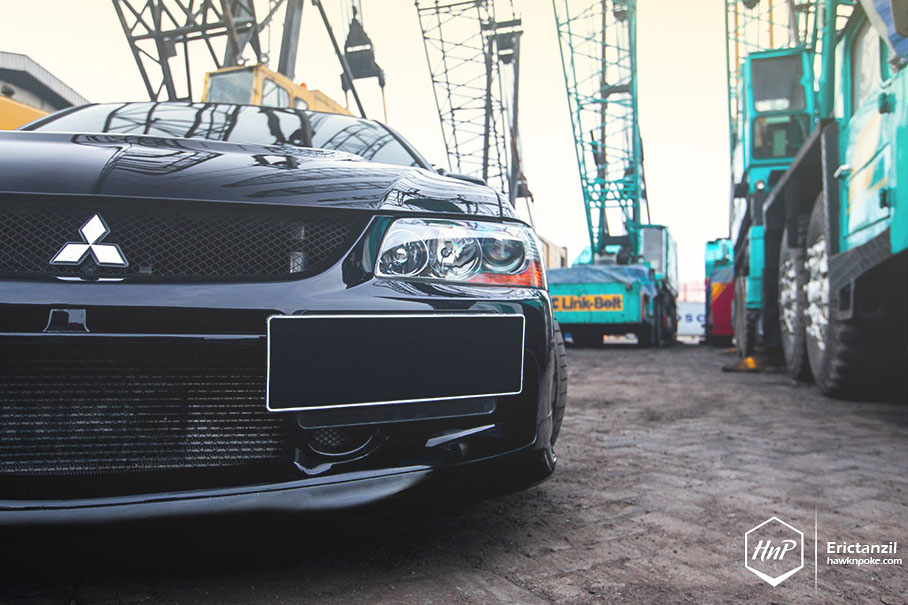 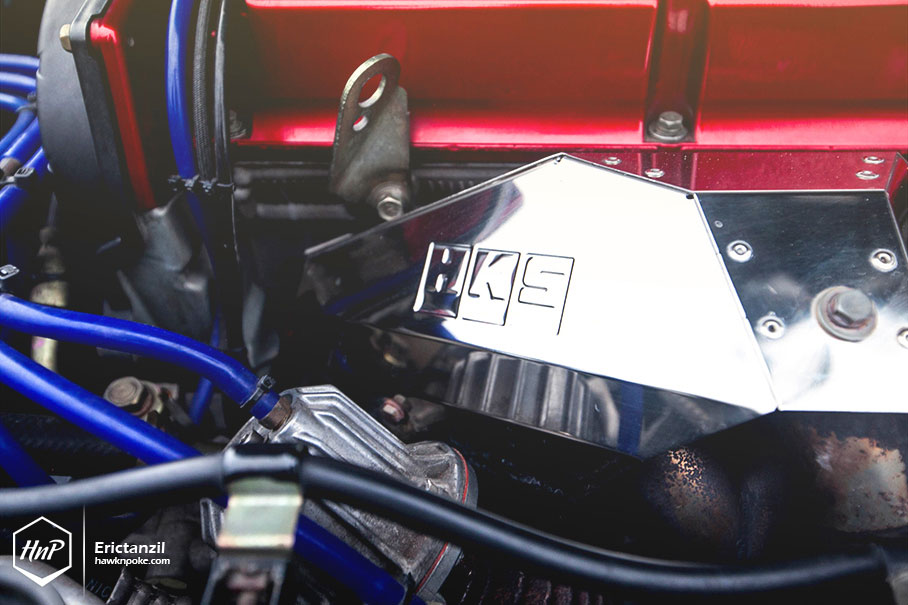 Churning out as much as 450WHP, the Evo has been equipped with a line-up of HKS performance upgrades. From the larger turbo, to Fcon to HKS intercooler and fuel upgrade kits. 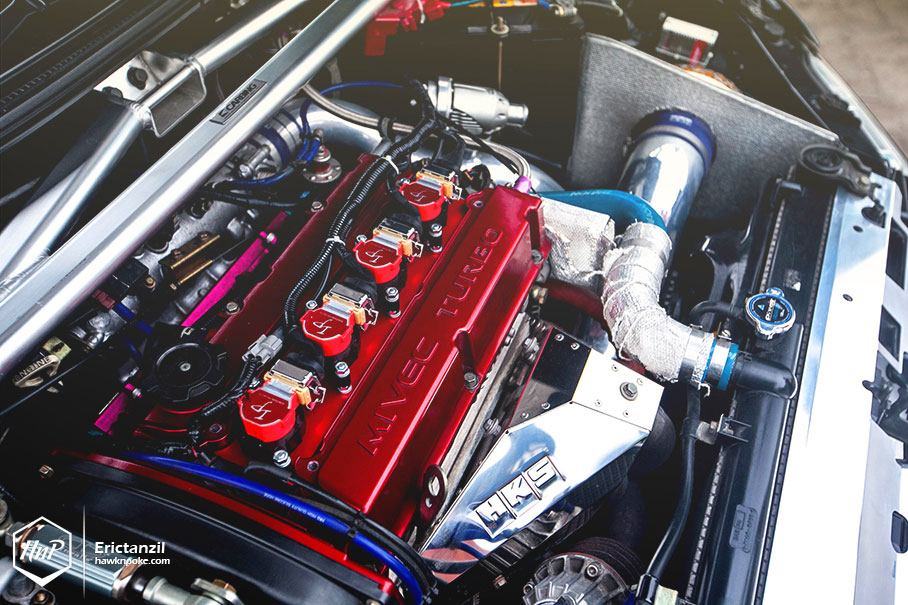 The impressively clean engine bay was one of the most attractive factors when Mr F first considered the purchase. All powerful yet undeniably neat, a combination cannot be found so often. 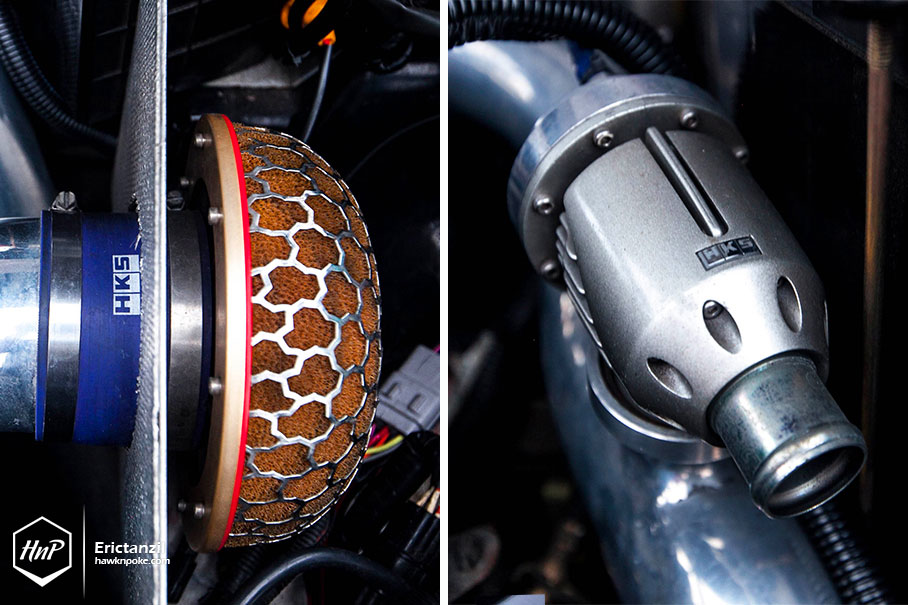 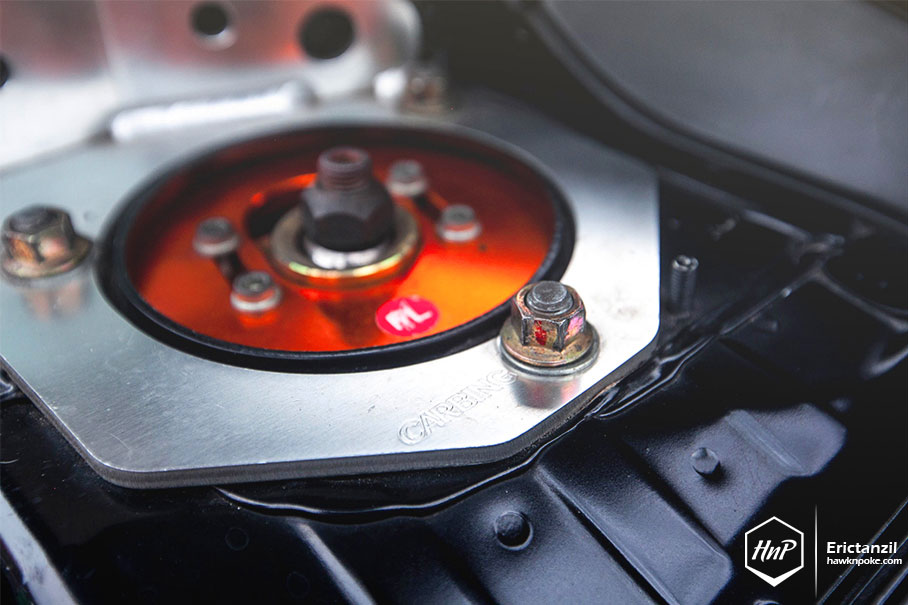 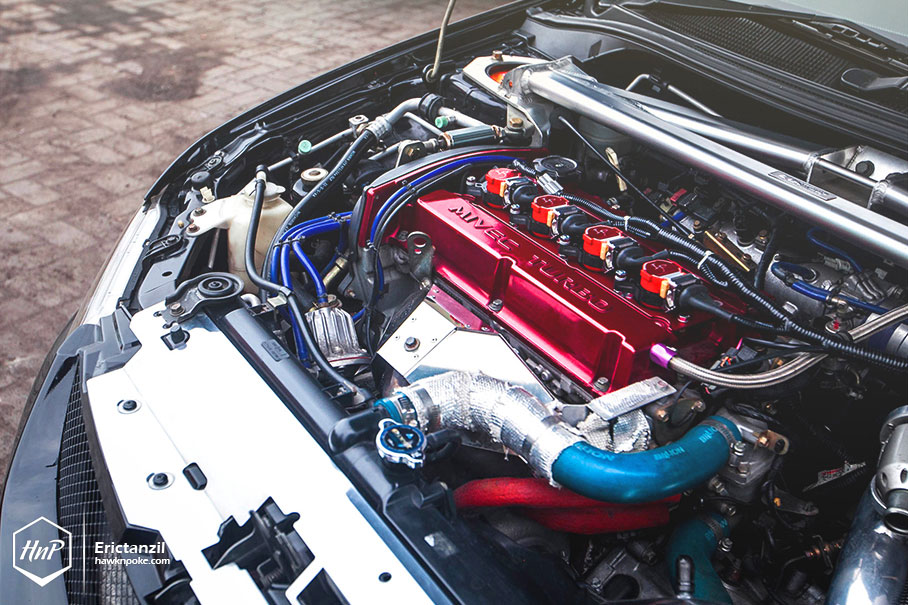 Being a modified car fan since 1995, Mr F has had quite a staggering list of modded cars. All of which I believe has been done so greatly and tastefully. Here’s his reply to our interview question in regard to his previous project cars:
– 1st was BMW E36 320i with MST 2.5 stroker kit, Hamann full spoiler, Hamann HM2 18″ wheel
– 2nd was BMW E39 528i with 3.0 Hamann stroker kit, Breyton full spoiler, Breyton magic 20″ wheel
– 3rd was E Class W211 E260 supercharged, AMG full spoiler, Brabus Mono IV 20″ wheel
– 4rd was Mazda RX8 GReddy turbocharged, Mintblue full spoiler, Rays GTC 20″ wheel
Impressive isn’t it? Notice how he’s starting to get more deeply involved with the JDM scenes overtime. From E36 and now to GT-R’s and Evolutions. The all-wheel-drive system and highly tunable engines are amongst his personal favorites when it comes to the JDM rides. All about the driving experience. 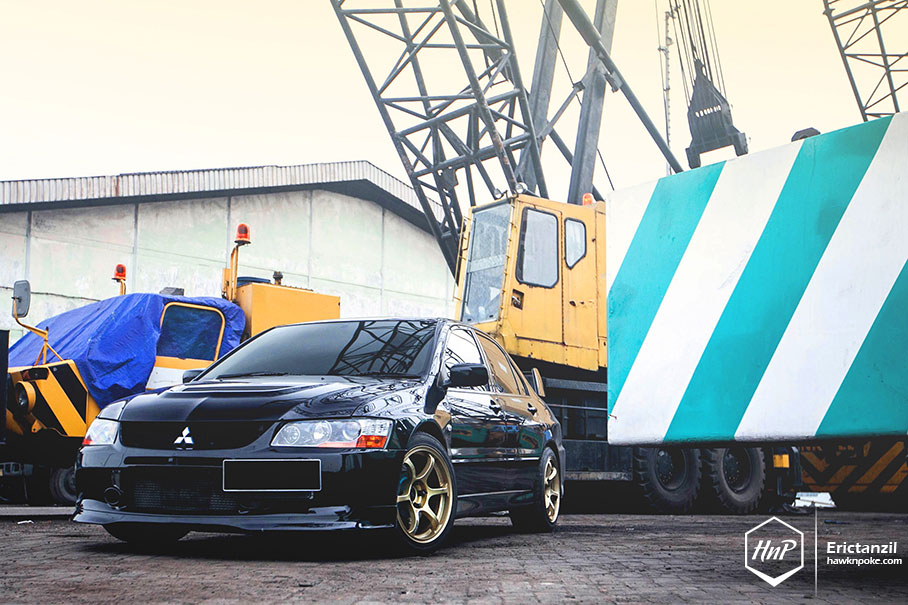 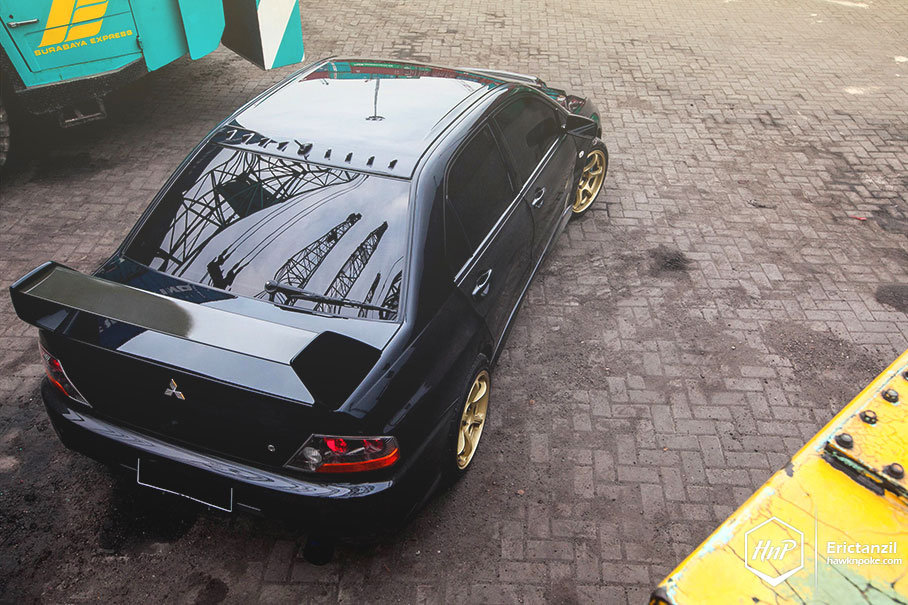 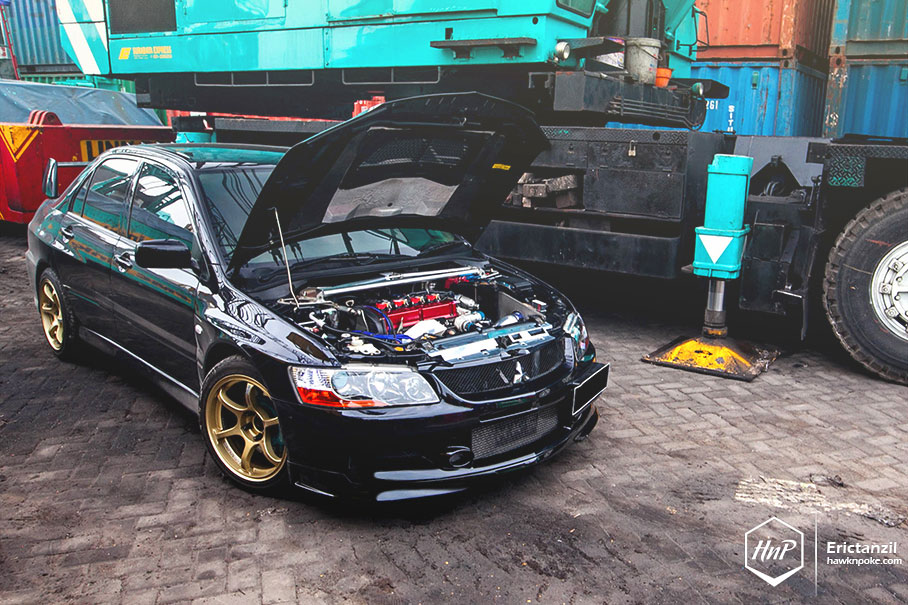 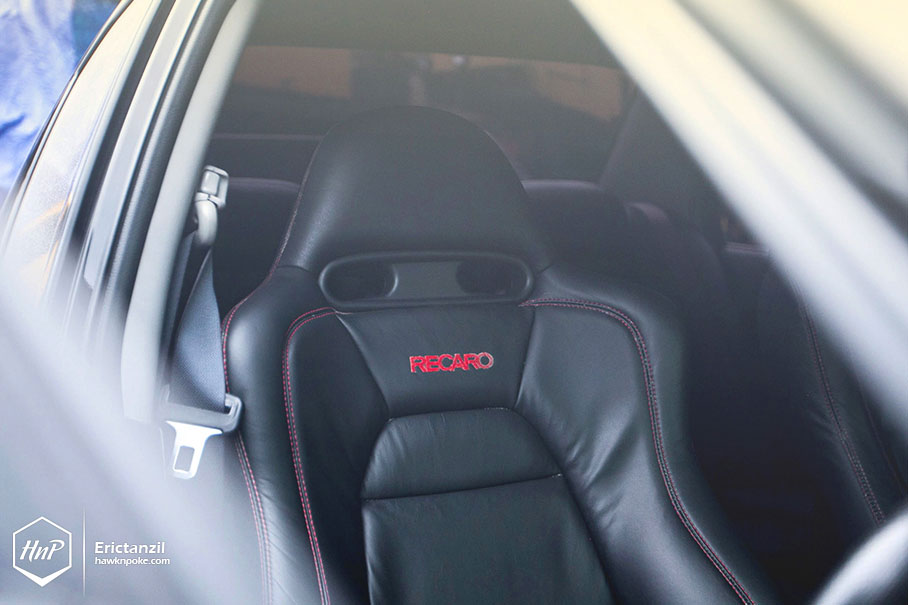 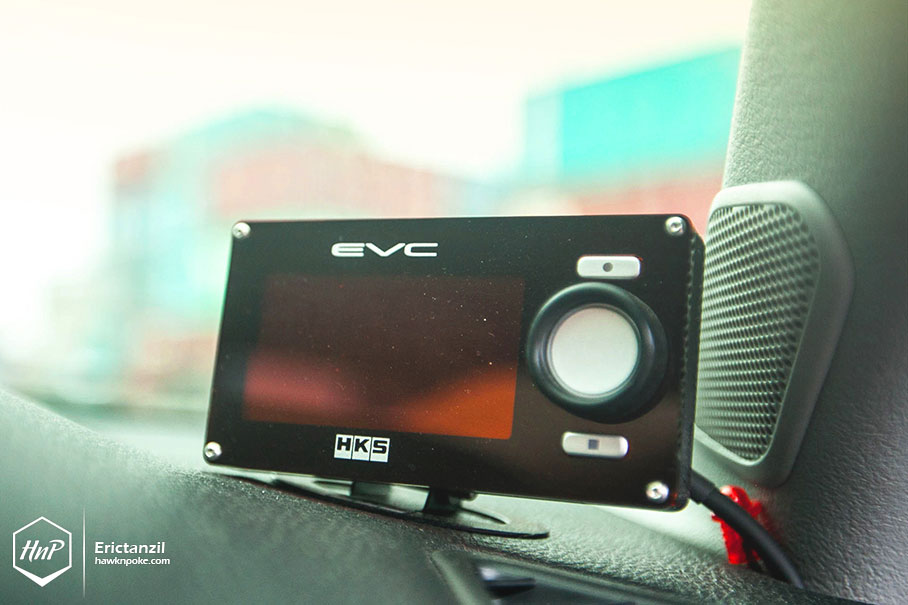 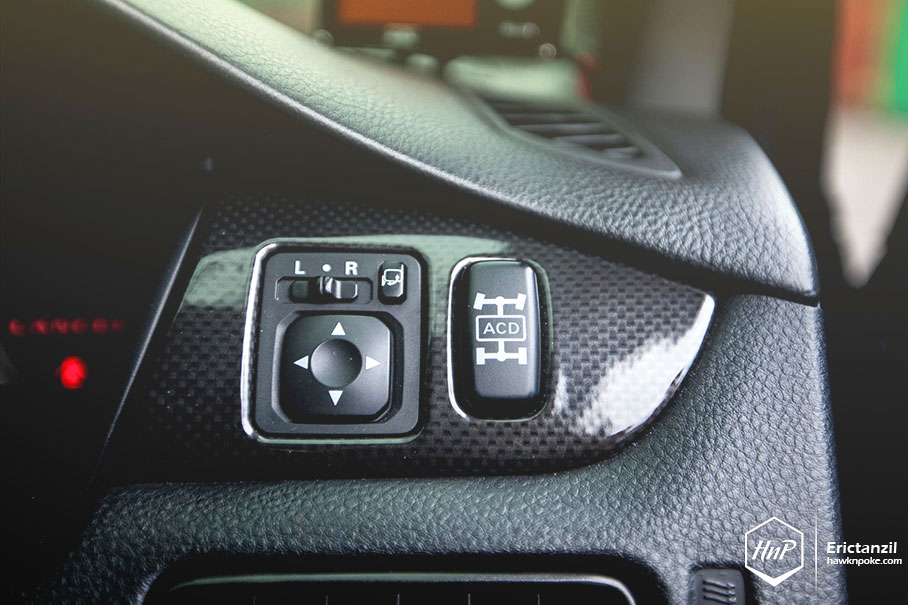 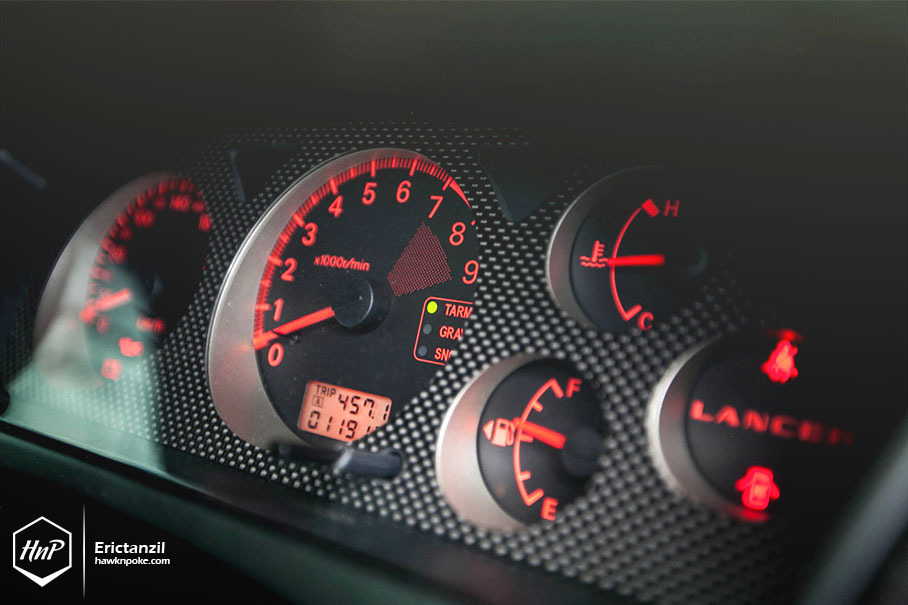 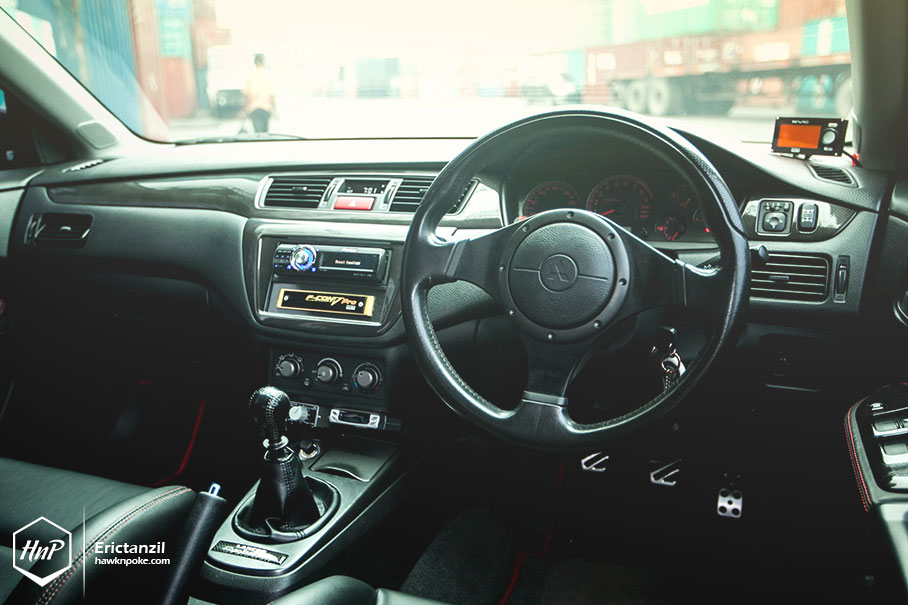