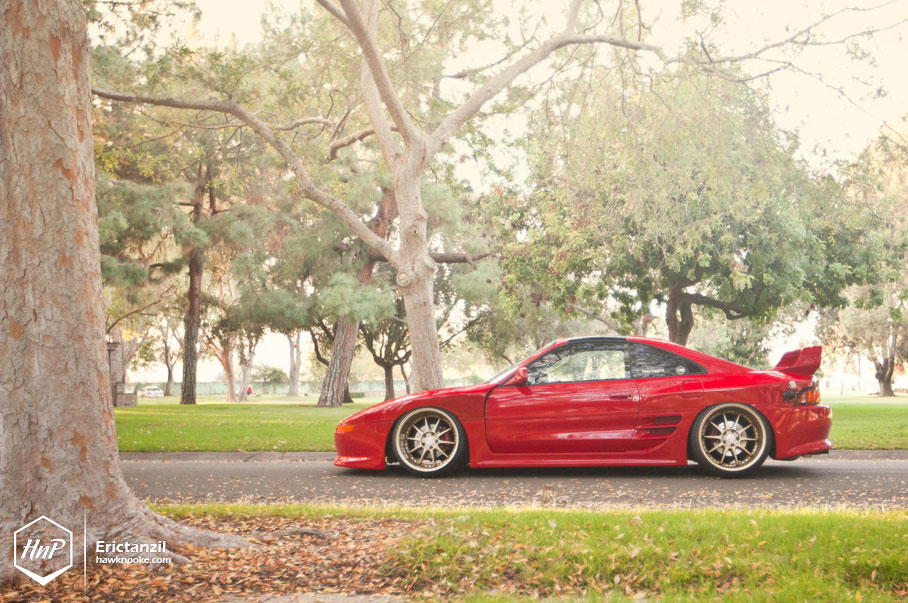 As a start, let me give you some no-frills facts off today’s featured ride. 18″x10 fronts. 19″x12.5 rears. Paper-thin gaps between tires and fenders; about same amount towards the insides of the car. 366WHP from the boosted 3SGTE engine. 408,000KM on the odometer. Custom built Blitz wheels with 6.5″-7.5″ lips. Made its way to Stance Works and StanceNation homepages. Shot by Eric Tanzil during his visit to the States. And, most important fact of all: owned by a fellow Indonesian who’s been living in the States. Meet Armand Pranandi and his 1993 “Red Devil” MR2 Turbo Widebody. A conversation starter in the online world; a perplexing piece of machinery in real-life. 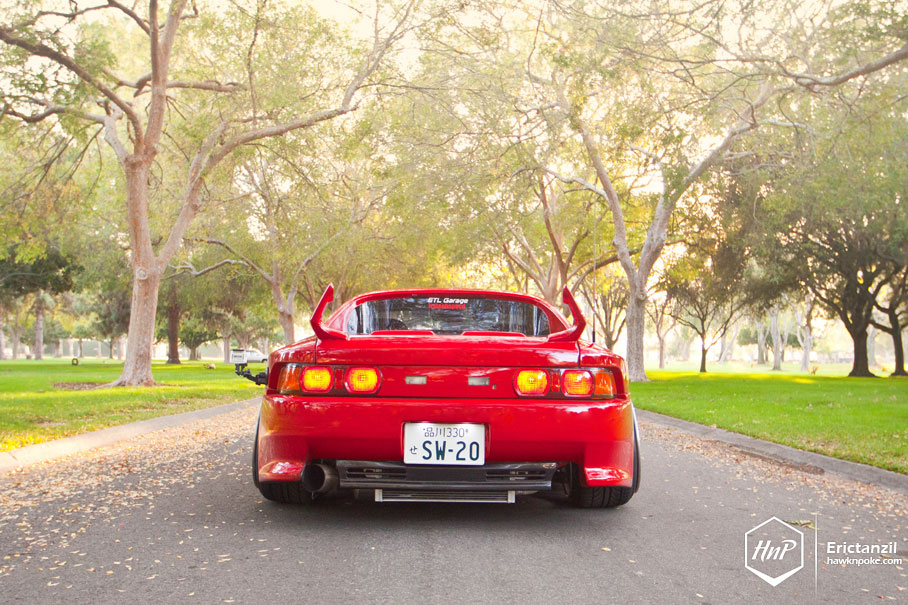 How did Armand get this far? We’d have to go back to the ’80s-’90s. Growing up in Indonesia with such a strong passion for automotive, Armand spent his youth reading imported US automotive magazines. Finding inspirations. Creating dreams and building hopes. Hopes of one day being able to drive his own turbocharged-mid-engine RWD, in a two-seater configuration. Therefore, back in those days, two cars came up as Armand’s dream rides: the famous Ferrari F40 and the understated Toyota MR2. 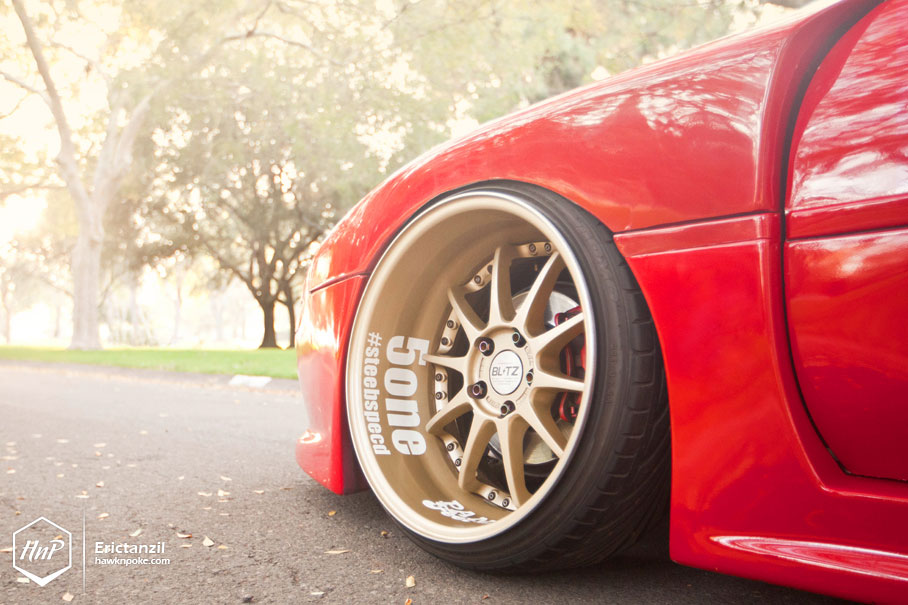 Despite his love for those mid-engine coupes, Armand had no choice but to be settled with a ’86 Toyota Corona when he was in high school (that’s back in the early 90s). No doubt that car was pretty way off from being even remotely similar to his dream ride. Nevertheless, that car made its way to becoming one mean machine during Armand’s two-year ownership. From swapped pistons (1.6L made into 1.8L) to Webber 45mm carburator, TRD clutch and camshafts; it was a pretty wildly modded Corona for its daily driven status. Fast forward to 1998, Armand moved to the States to continue his study in the Iowa State University. It was this decision that has given him the huge opportunity to finally explore the US car culture that he’s been reading about in those magazines. 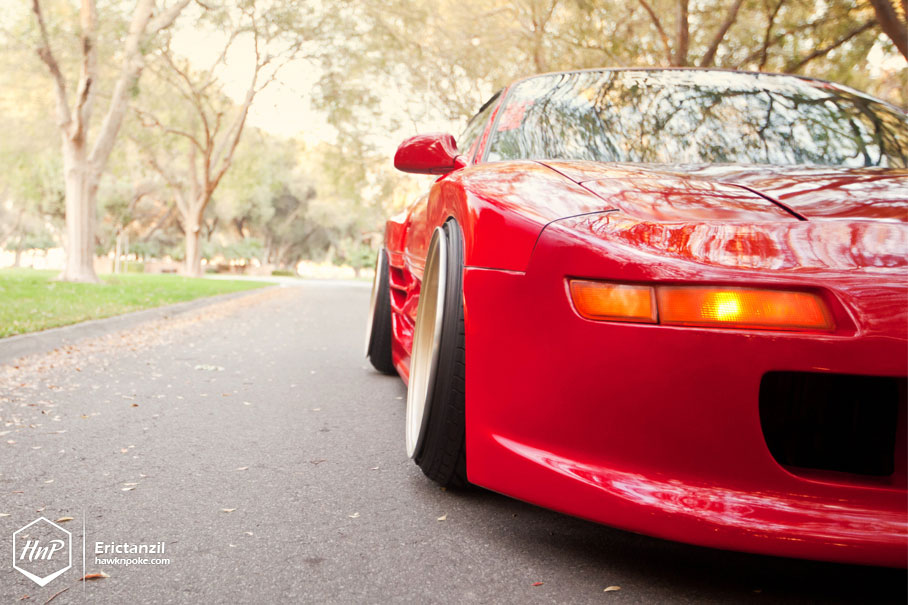 Long story short, upon finishing his masters degree in 2007, Armand has finally succeeded to get his hands on this dream ride: the Toyota MR2. The mid-engined turbo two-seater that he has always dreamed about. An accomplishment that’s been years in the making; finally coming true. The car was Ivory White at that time, with 220,000KM already clocked on the odometer. The plan was to have the MR2 as a project car, while still keeping his no-frills daily ride for work. 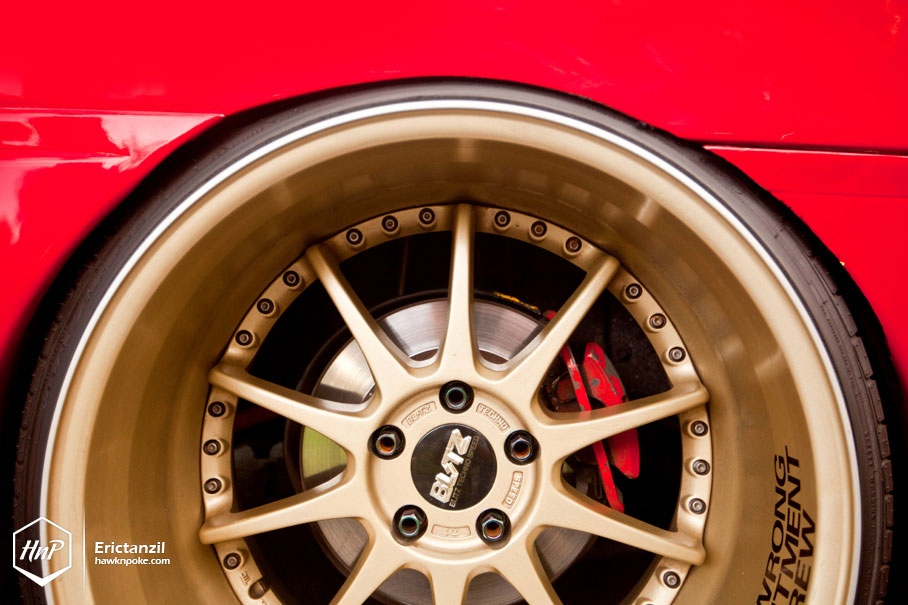 However, just after one-year ownership of the MR2, Armand has simply decided to let go of his daily car and treat this MR2 as his daily instead; making it the daily driven project car. In 2009, he repainted the car to the current Ferrari Corsa Rosa paint scheme you’re looking at, with plans set up to further lower the suspension and install the widest, most aggressive wheels the widebody MR2 could possibly handle. Thus there’s only one way to go for the coilover set up after this period: downwards. 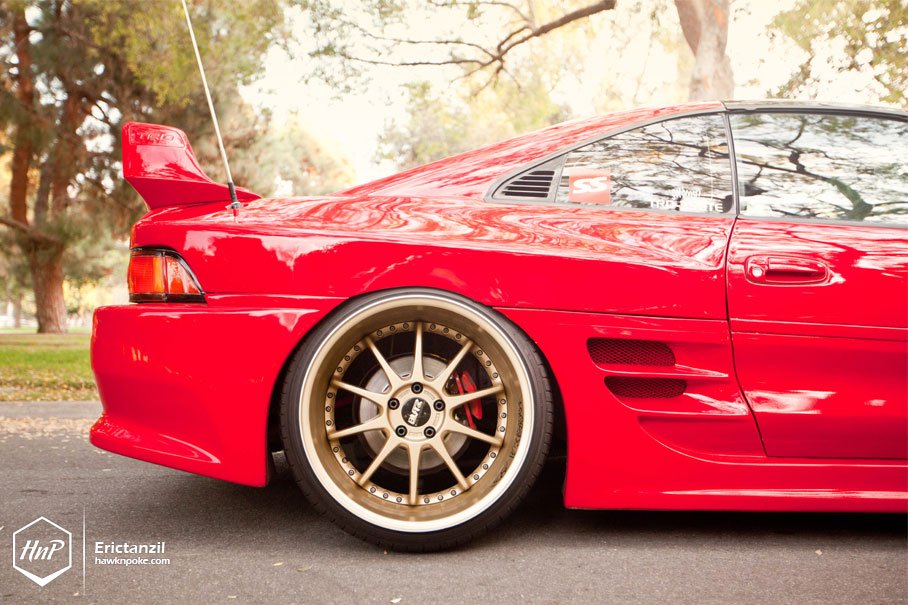 After going through several different sets of wheels, from XXR’s to Gold Meister S1’s, Armand most recently installed this set of Blitz TechnoSpeed Z1 custom built by a close friend of his, Steven Pan from 5one in California. Steven was also the one who has set up the custom Koni coilover suspension, coupled with 11.6Kg front / 12kg rear spring rates; making sure the wheels’ movements are always to be within a safe range, as not to ruin the fenders nor the insides of the wheel arches. 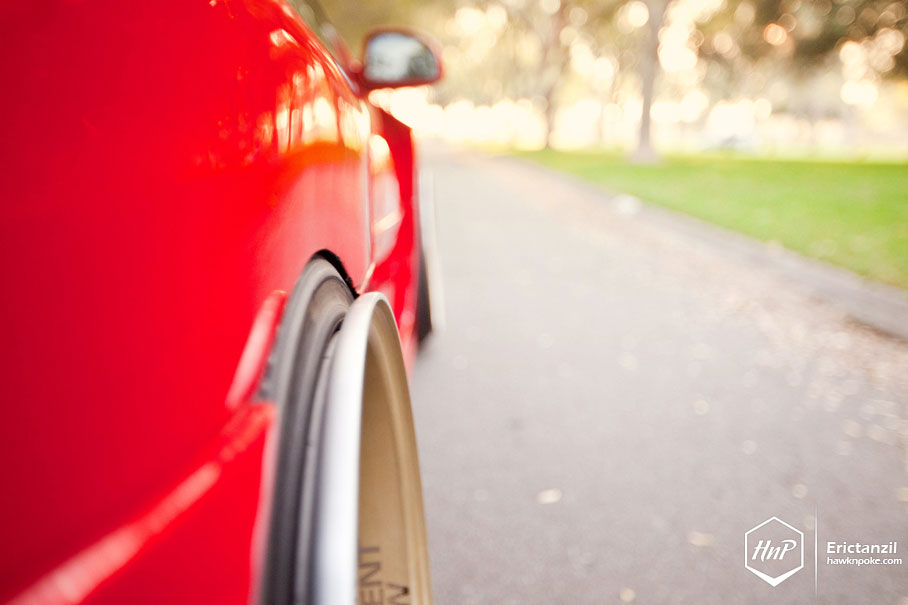 Exactly the kind of fitment that Armand has been pursuing for. To achieve this look at a height this low, Armand has radiused these fiberglass wide fenders as to accomodate those 19″x12.5 rear wheels. Wrapped by 265/30 tires, it’s a set up that has perfectly combined optimum wheels width with just the right amount of tires stretch. 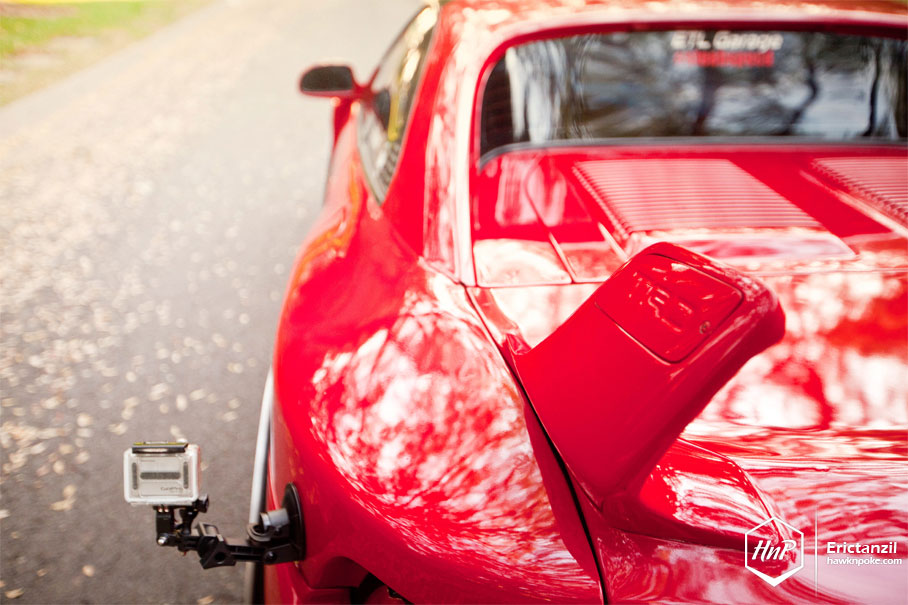 You might’ve noticed the GoPro being stuck to one side of the car. Armand has always installed this mighty device during long trips to capture the road conditions along the way. So that he could record and anticipate any bad road conditions during the next trips on the same route. 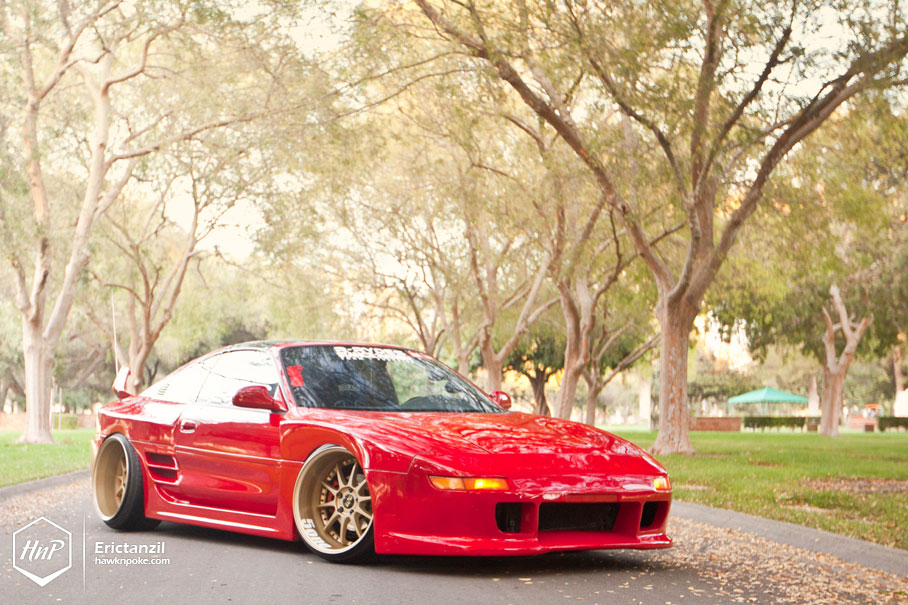 How did Eric Tanzil get the opportunity to meet Armand? Well it was thanks to Anthony, Eric’s friend, whose USDM Fit we featured last week. Having some spare times during his trip, Eric asked Anthony whether he knew any other Indonesians whose ride would love to be featured on the site. Armand and one other friend (whose ride is coming up next week on the site) came up under Anthony’s suggestions and Eric was quick to set up the schedules for photoshoots. Oh and by the way, these pictures were taken inside a cemetery complex. 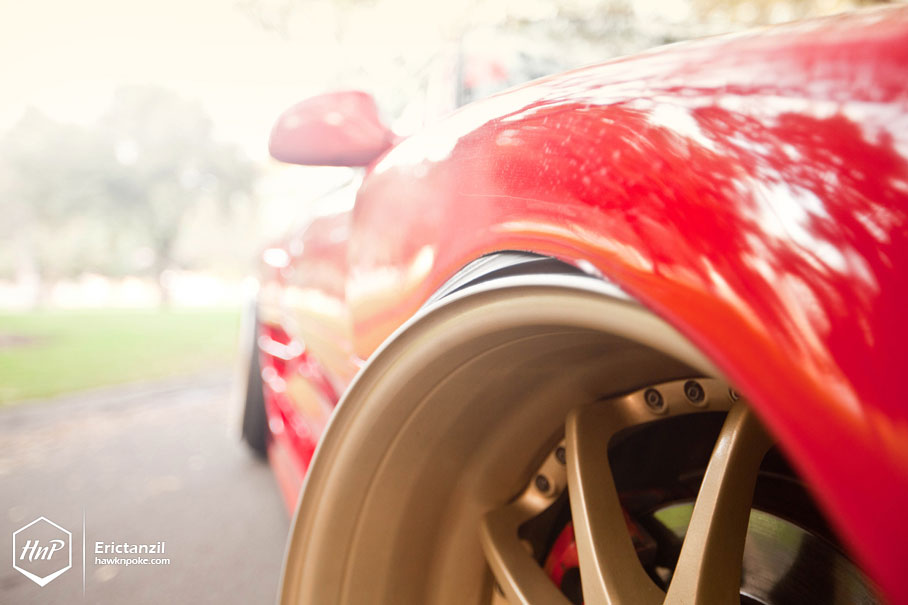 Paper-thin fitment gaps. Most might argue that Armand has terribly ruined the 366WHP capability of the MR2. But the way he put it, the car is functioning perfectly fine in driving him to work on a daily basis, plus occasional grocery trips and cross-country car meets/shows. With 408,000KM currently clocked on the odometer (that’s more than 30,000KM a year) performed under such a turbo boost and lowered suspension, I’d have to agree that the car is functioning just fine. 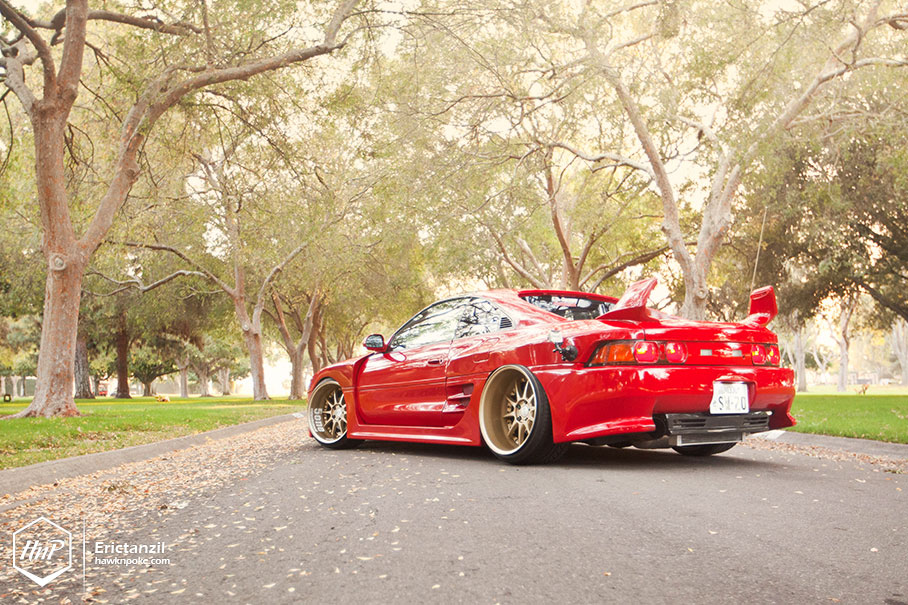 What has happened to that rear wing? Was it left intendedly unfinished? These are the most frequently asked questions that Armand hear every time he came up to meets and shows. Well, there’s actually quite a story to it. Armand did have the top of the wing installed early on during the build. However, an unfortunate incident involving a drunk person has left the wing broken in half, leading to Armand’s decision in simply taking off the entire top section of the wing, leaving the “Devil’s Horn” look that’s always been talked about today. Will he install a new top section to the wing? Most probably not, as it has sort of become the ‘trademark’ to Armand’s ride. 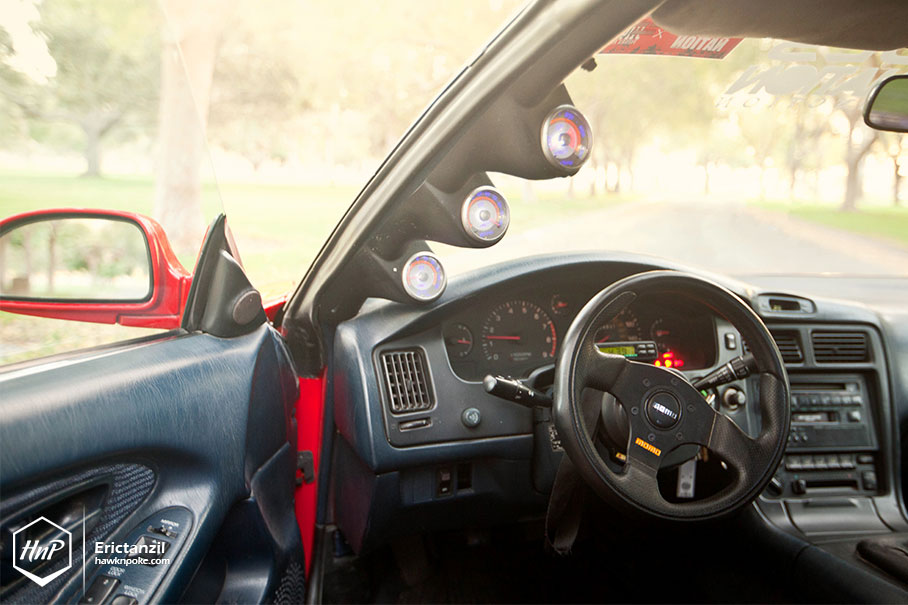 Armand has a pair of boost pressure gauges installed in the interior of the MR2. Yes, a pair of gauges (that’s two!) showing the exact same indicator: boost pressure. One gauge on the driver’s side, the other on the passenger’s side. Why? Because one of his ex-girlfriends used to ask him frequently the current boost pressure that the car’s running. So, as to give a more accurate information to her, he has simply installed another gauge on the passenger’s side. Genius. 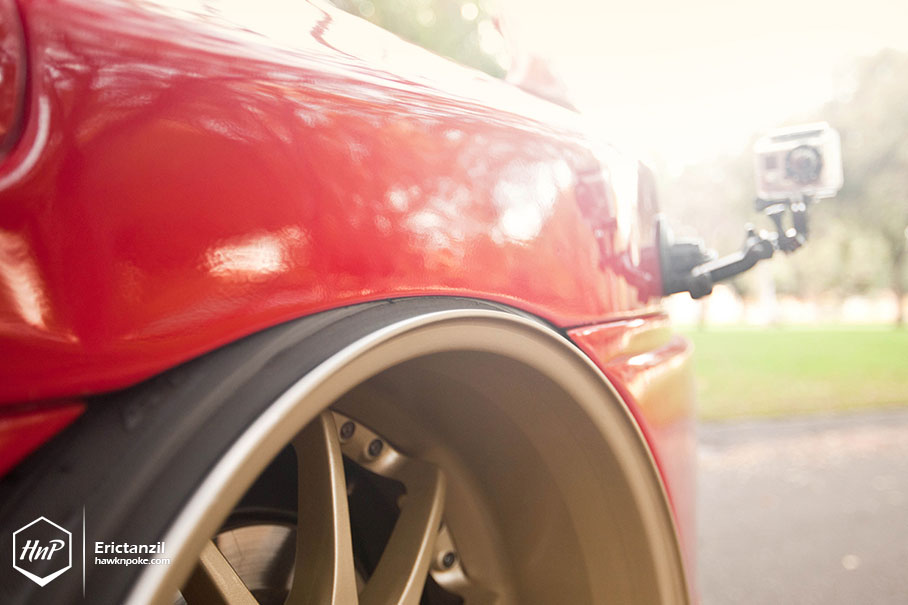 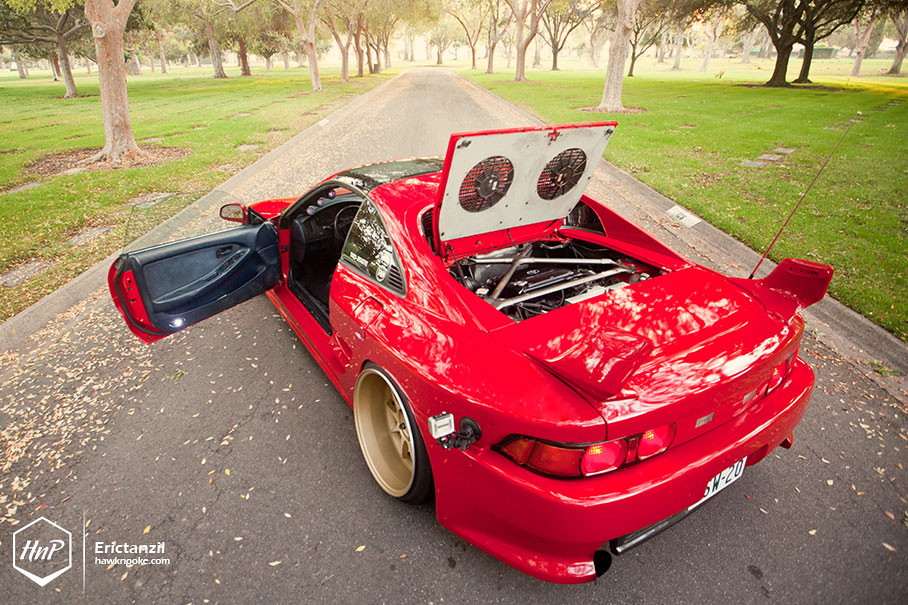 Where did all those horsepowers come from? Well, apart from the aggressive footworks, Armand has also kept quite an aggressive beast under the hood. From turbocharger to water/meth injection system, the car has been pushed to the limit in terms of optimum power mated with uncompromisable reliability. After all, this has always been his daily ride for all the trips he took all these years. It’s got to be reliable. 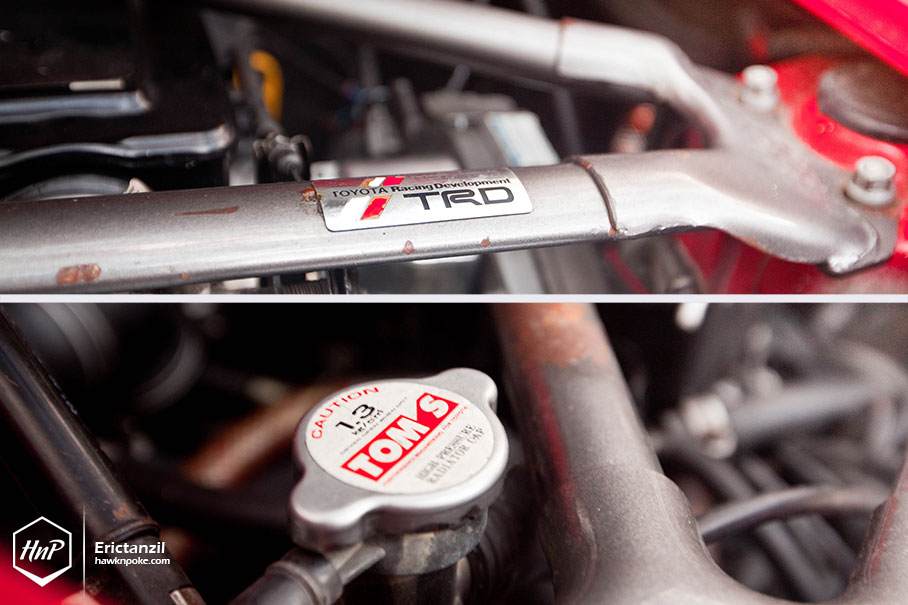 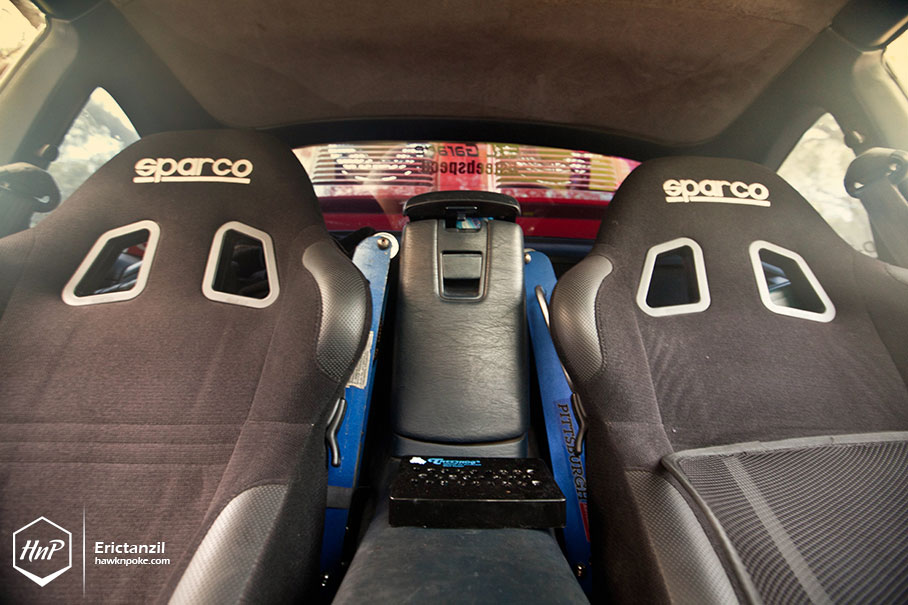 Notice the pair of jacks behind those Sparco seats? Armand has always kept a comprehensive set of tools in the car. From jacks to wooden boards, as weapons in tackling uncertain road conditions. Lucky for Armand he’s currently living in South California, where most of the streets are generally nicer compared to the surrounding regions. 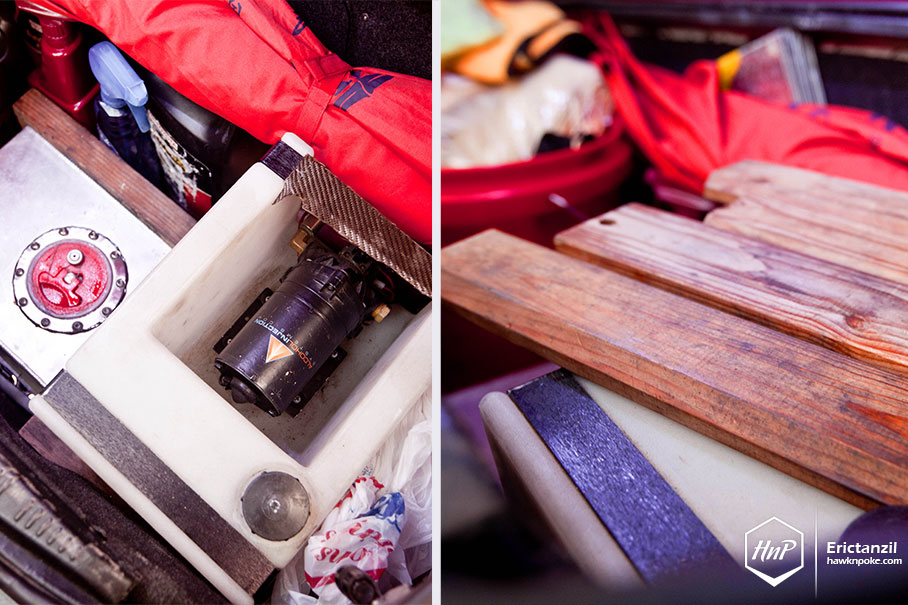 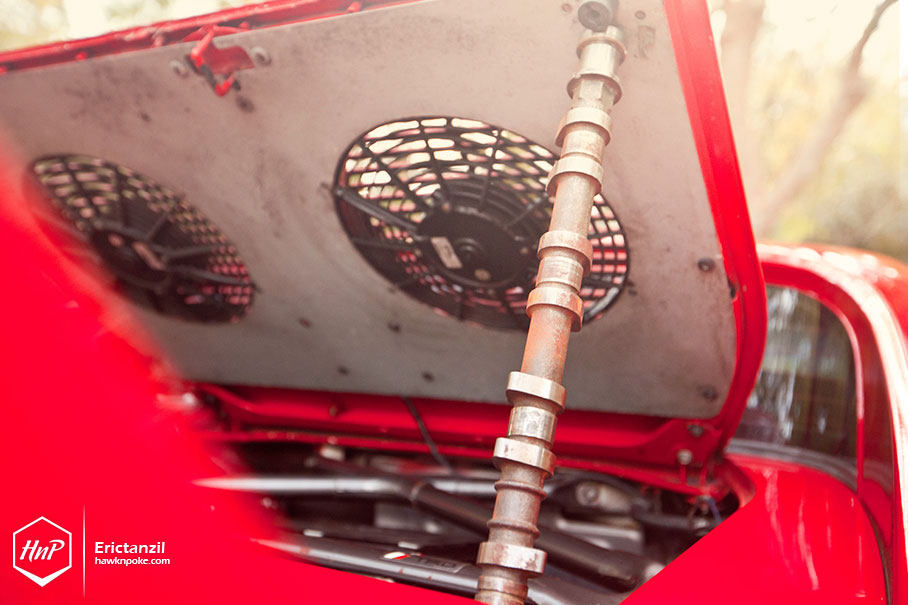 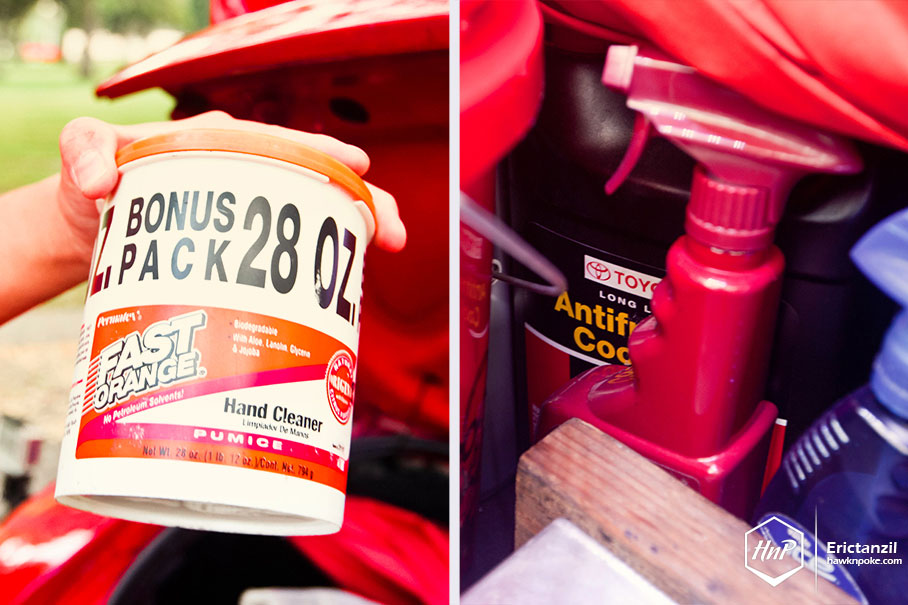 What’s next? Armand has just recently installed those Sparco seats and Momo steering wheel. Something for the future would most probably be an engine swap. With almost half a million KM already clocked by this compact little engine, perhaps it’s about time for Armand to step things up a bit by installing a different breed of heart into the MR2. 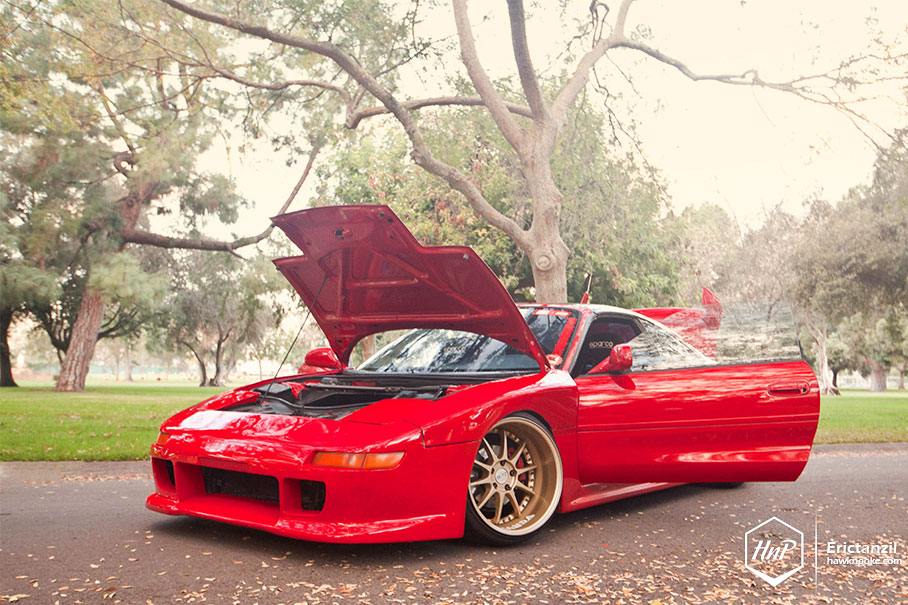 A short shoutout from Armand: “I would like to thank Tee Giang and Steven Pan for their tremendous help with how my car sits as of now. Their knowledge and help are the major force behind my build. Steven Pan has built my custom suspension and also the Blitz TechnoSpeed Z1. His website: Facebook.com/5thwheeldesign. Also my team RRydes, Jeevey Bathan from ETL Garage in Pomona, and ABC bodyshop.”