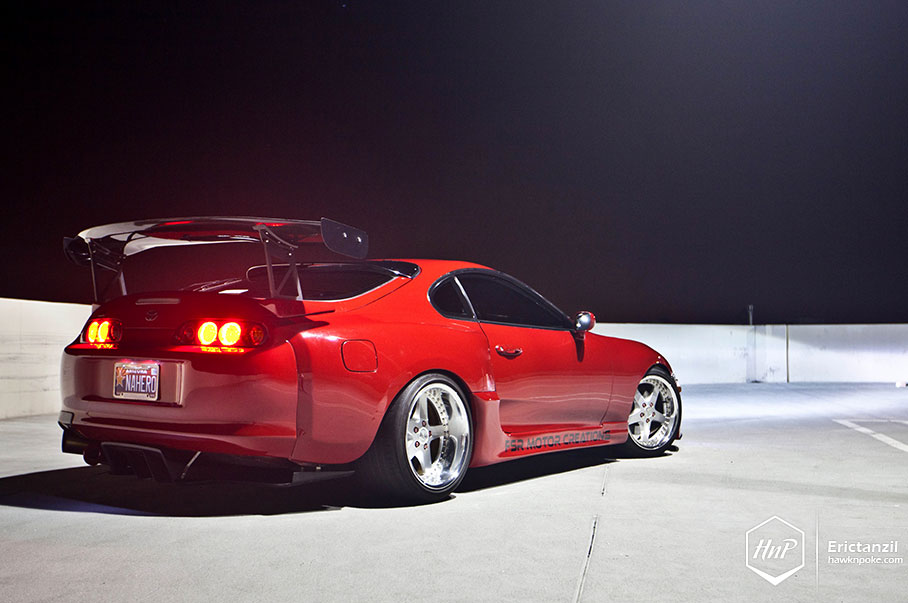 The Toyota Supra. Japan’s very own muscle car. One of 1990s’ most popular platforms of choice when it comes to creating high-powered drag monsters and mind-blowing track beasts. With great handling, huge output potentials and such great looks, it’s no wonder that the MK4 chasis is still greatly sought after even to this day. And perhaps you’ve also seen way too many of 1000HP+ turbo Supra builds all over the net and magazines, yet very little has ever been heard from its humbler, often ignored cousin: the 3.0L N/A 2JZ-GE. So today I’ll take you to meet one very prime example of it – Brendan’s widebody N/A Supra.
Captures were taken by Eric Tanzil during his US SEMA trip. 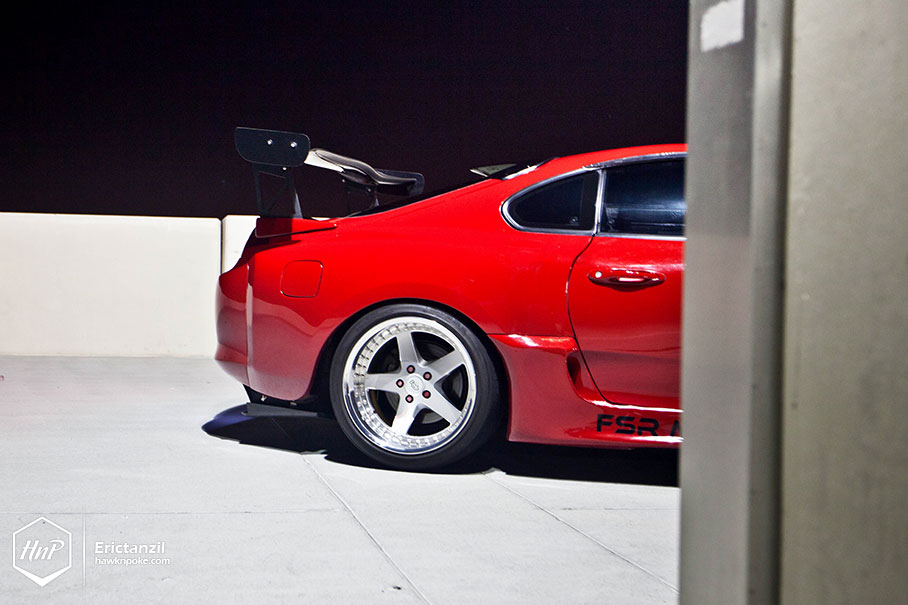 It was around ten years ago that Brendan traded in his Honda Accord for this 1995 N/A Supra. The budget constrained college-Brendan of that time was so excited in trading in his boring Accord for anything sportier to accompany his daily trips. After all, his hobby in reading modified car magazines has naturally called him to stop browsing and simply start building his own project cars instead. Nissan 300ZXs, FD RX7s, 1969 Dodge Chargers, 1969 Challengers, and 1968 Camaros all came out as his platforms of considerations. But never has he imagined that his budget would be enough to grant him the keys to the legendary Supra, his very own holy grail of Japanese sports car. Yes it was the N/A version that he could afford, but Brendan is determined to turn it into something memorable. 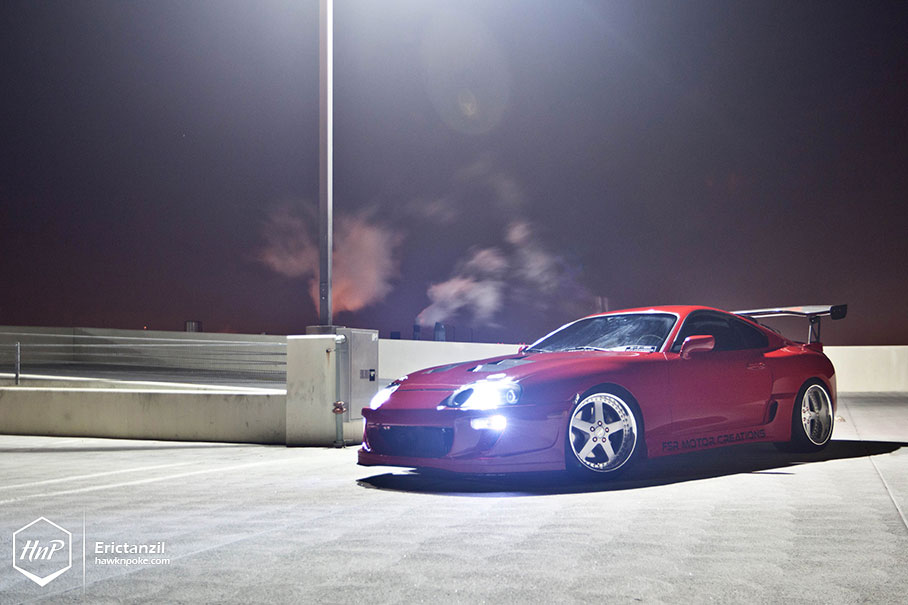 Being so tight on the budget, it wasn’t until four years ago that Brendan started putting some really serious work into the Supra; accidentally it was. One rainy morning drive back from Cars & Coffee was the reason behind all these stunning bodyworks. Brendan lost control of the car during that drive and ended up hitting a trailer attached to a big rig. As heartbroken as he was at that time, he’s determined to fix the car quickly and amp up further on its exteriors works: by giving it a widebody makeover. Brendan quickly handed over the car to the experts at Platinum VIP Irwindale to do the custom metal widebody, which soon after became one of his most favorite parts on the car. 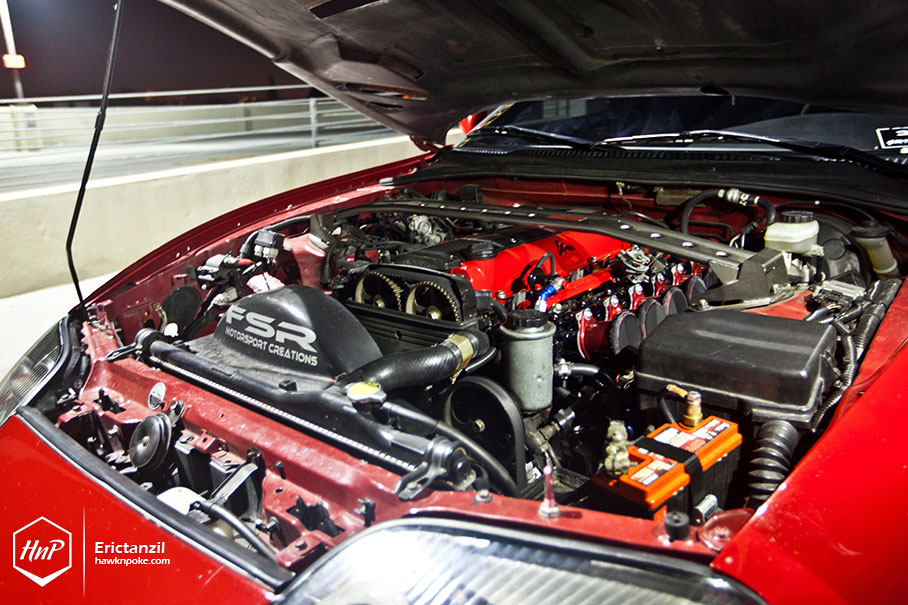 Since the beginning, Brendan has always planned to obtain larger outputs out of the Supra’s timid N/A engine. With most people relying on tried-and-true bolt-on turbo kits as the most practical solution, Brendan also almost fell to that mainstream approach at one time during the build. He had a turbo kit ready to be bolted onto the engine when he ultimately changed his mind by opting for ITBs (Independent Throttle Bodies) N/A approach instead. Inspired by YSR Japan’s ITB 2JZGE, Brendan couldn’t help but to admire the glorious noises and engine responses that such a setup could offer. Plus, it was also the road less travelled for most Supra owners, making it a more unique and exclusive N/A Supra build for Brendan. 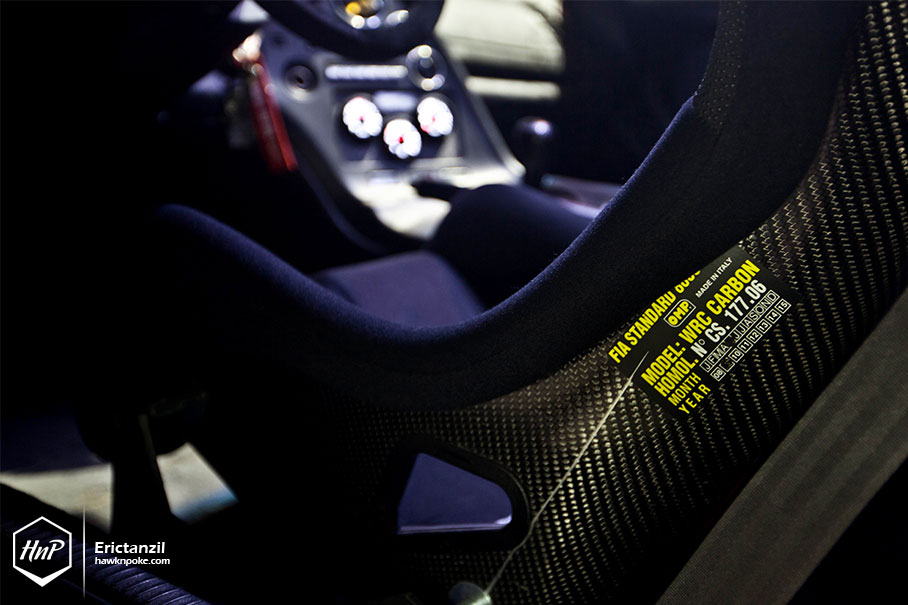 Gone were the plans for the turbo kit and came along Brendan’s decision to go through the more painstaking approach of sourcing and installing ITB’s. Specifically he chose to rely on AE111 ITB’s to build upon his custom ITB setup. He chose to base the parts on AE111’s because they stil belong in the same family – Toyota’s family. These parts, though, aren’t exactly easy to find and not many shops could do the rarer-done-approach installation reliably. Browsing around with a lot to be considered, Brendan finally put his trust onto those at FSR Motorsport Creations. With dozens of Supras, VR4s and FD RX7s scattered around their shop, Brendan was left reassured that his Supra would be well built under their expertise. 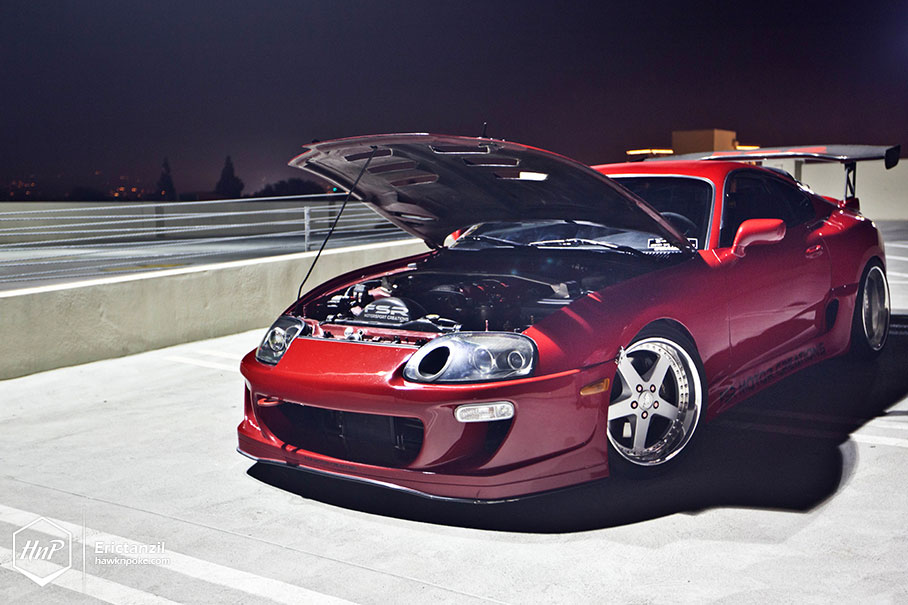 Some fine tunings and a dyno later following the return of the car from FSR, Brendan can’t be left happier by the result. The engine churned out some of the most distinct engine noises out there, with an increase in WHP by 40HP. Making the N/A Supra the perfect track setup for Brendan who has since then become a time attack track nut! 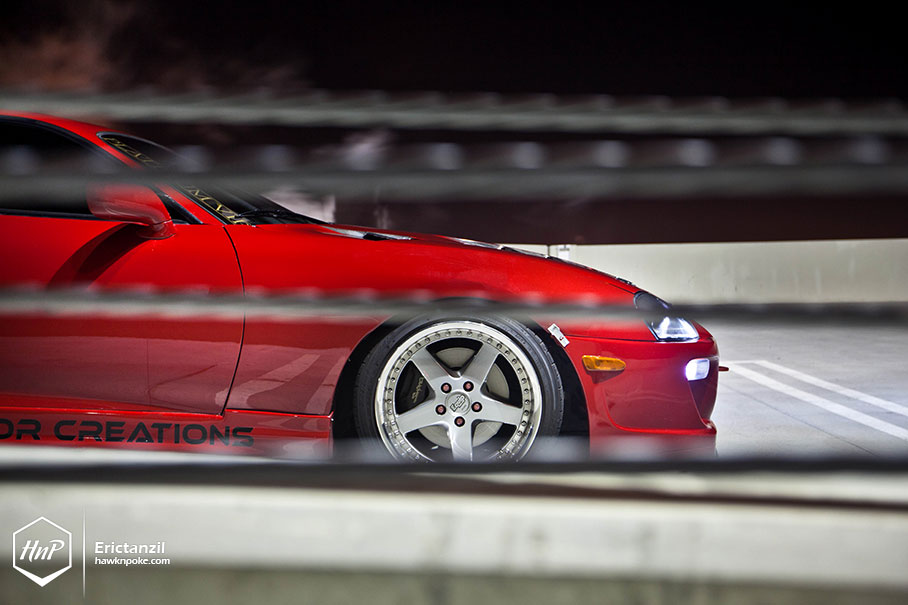 Future plans? Pretty soon Brendan will be installing a fully built head to attain even higher horsepower figures and revs, all while maintaining the ride’s NA HERO status. Following the engine upgrades are some more works on the aeros and quite possibly the installation of cages in the interior for added safety and rigidity. I can clearly see the NA HERO becoming more and more of a perfectly track-setup rev-happy Supra! 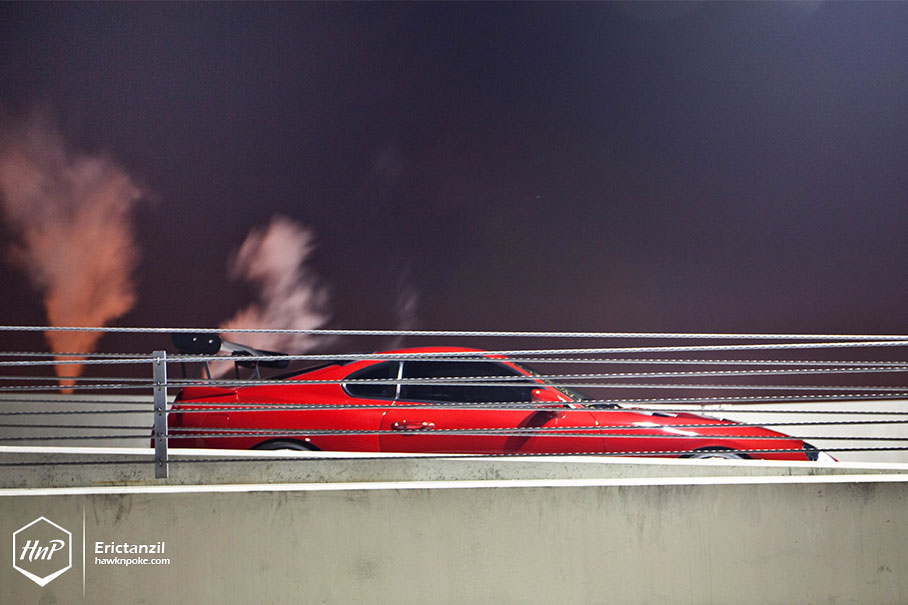 Brendan also admitted that when he was only 18 (around 9 years ago), he was once caught speeding with the Supra on local streets by a watching police. The unfortunate incident happened just within a year of the car’s ownership, ended up with the police pulling his gun towards him, and having his hands cuffed for the violation. Lucky his oldman came to the rescue at that time. Telling the police that his son has simply had a moment that lacked proper brain function and didn’t usually do stupid acts like that! The police officer then surprisingly gave him a reckless driving ticket instead of the Felony ticket he wanted to give for evading arrest. Lucky for him! 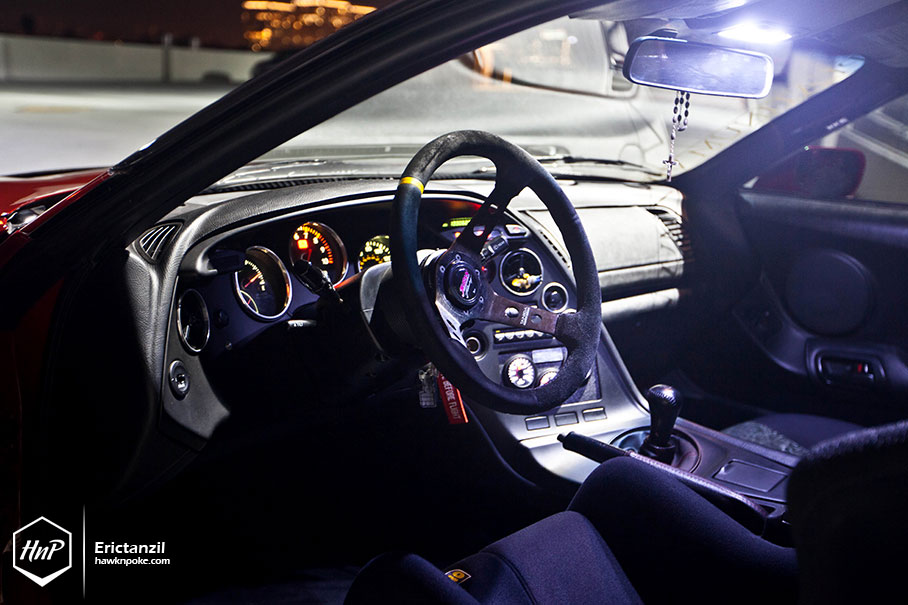 A short shoutout from Brendan: “I would just like to give a shout out to FSR Motorsport Creations and Platinum VIP for their business and their work. My car wouldn’t be how it sits if it weren’t for you guys. And a huge thanks to my pops for always being there when I need you with my car and without of course.”
And here’s a clip of our hero on a dyno! Caution: it’s pretty loud.