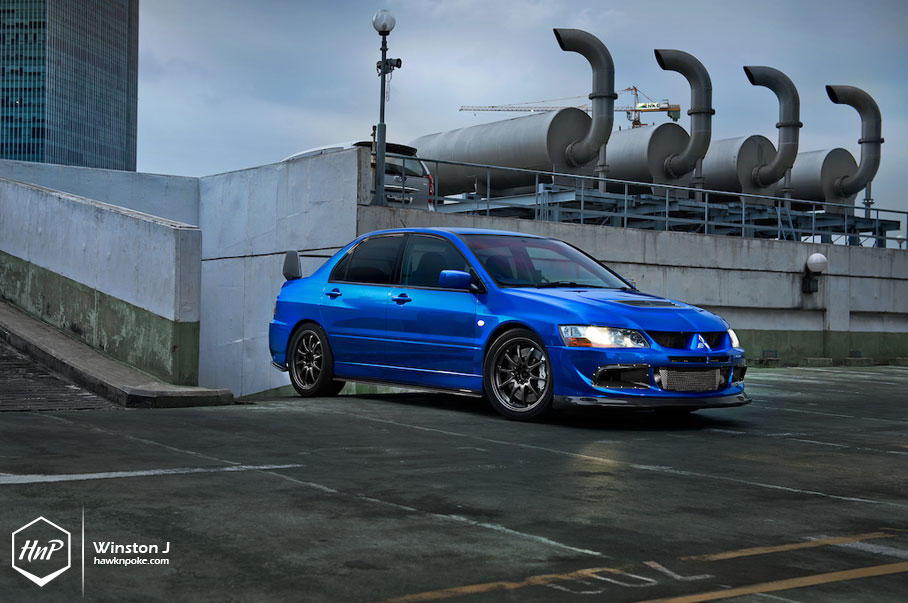 The Evolution. The warrior to the three-diamond-badge’s army of Japanese engineering. Brembo brakes, Recaro seats, Bilstein shocks, Enkei wheels, carbon fibre rear wing. No, these are not the parts that Didi the owner has installed on his ride. Instead, these are the parts that Mitsubishi has given all Evolution VIII owners as its standard package. Fast, nimble and uncompromisable, Mitsubishi has essentially taken its WRC rally car blueprint, infused some convenience features onto it and selling them as production models. Easily matching the lap times of entry level Porsche’s at only a fraction of their price, the Evolution lineups have always provided the best bang-for-the-buck to those who seeks performance above all other features. But what’s even more staggering than the Evolution’s stock performance is its endless number of aftermarket parts available. Essentially opening the gate to the world of supercar-beating performance. 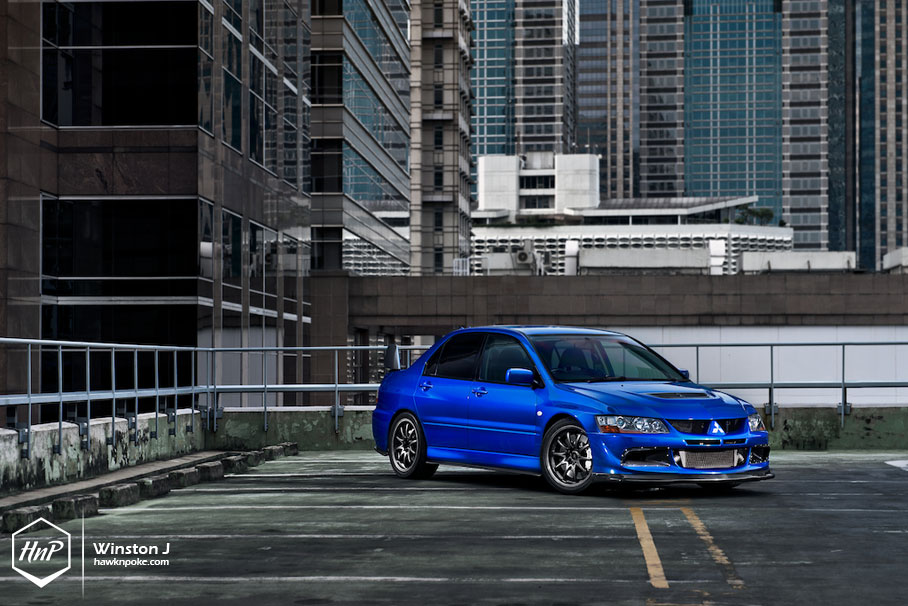 Evolution 6 Tommi Makinen Edition and Evolution 8 MR (the red one in GENESIS trailer) were among the past rides that Didi has owned these past few years. Clearly then, he’s been a fan of the Lancer Evolution lineup, and this is his latest creation: the Daytona Blue Evolution 8 GSR with an approx horsepower figure of 300whp. Oh and by the way, it took the painter some 8 revisions to get this blue shade exactly the way Didi wanted. 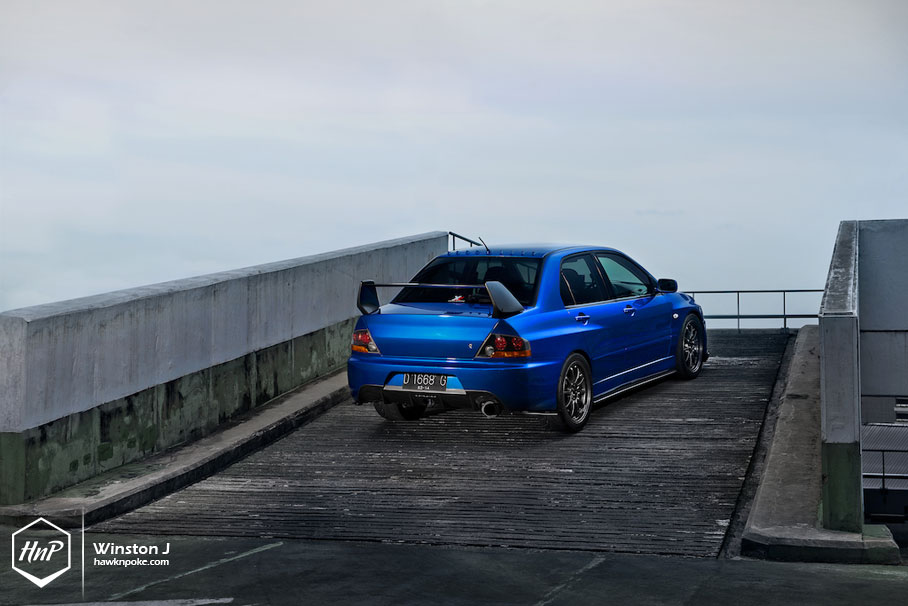 Built with a daily-driven performance setup in mind, the Evo VIII has been installed with a plethora of engine and exterior modifications. Engine-wise, almost every aspects have been upgraded to enhance performance whilst still maintaining the car’s reliability. Keeping the safe balance while having a larger horsepower output has always definitely been a challenge. That’s why, almost every aspects of the engine has been upgraded (cooling, fuel systems etc) to keep up with the horsepower increase, done at Excess Motoring. 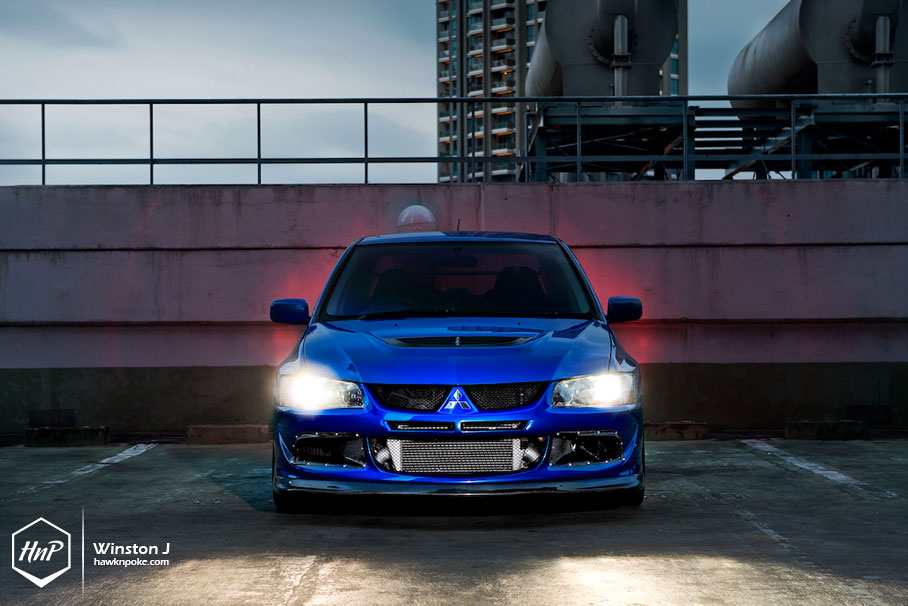 Exterior wise, a catalogue of Varis carbon parts have been installed throughout the Evolution’s body, enhancing its aerodynamic performance whilst giving a nice contrast to the body’s striking blue color. Evolution MR lamps have also been installed to equip the GSR with a fresher look and better night visibility. 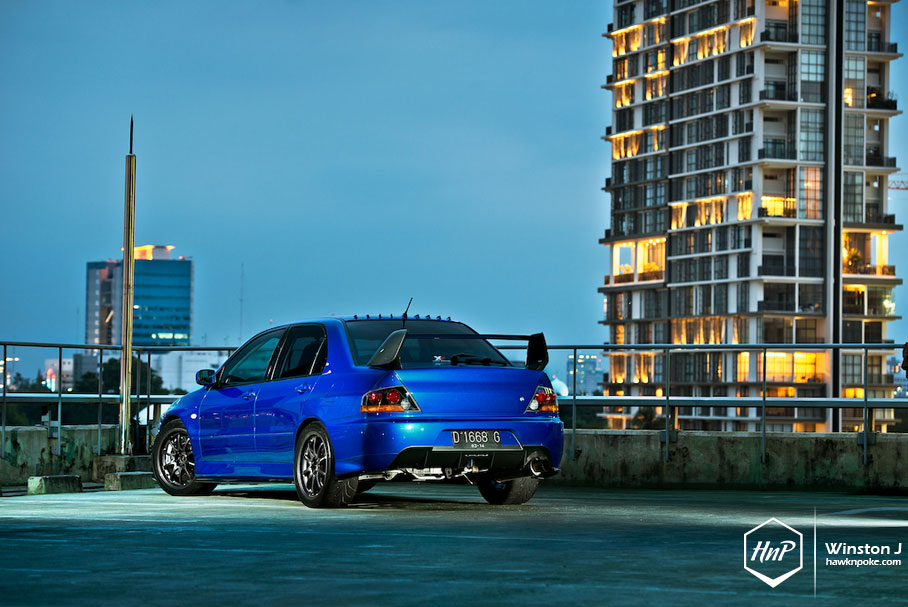 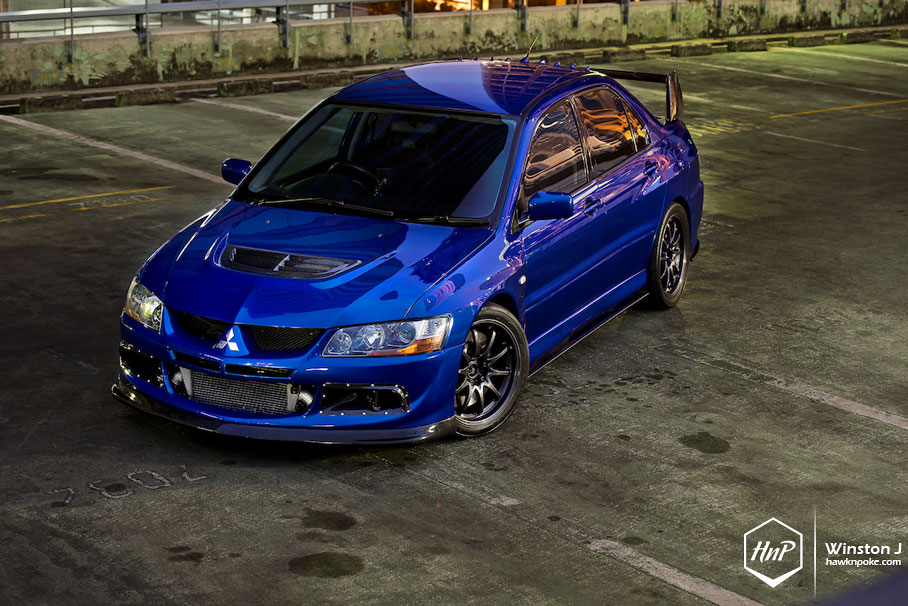 Wheels of choice came down to this set of lightweight 10-spokes Volk Rays CE28. Forged under one of the best forging machines in the world, these one-piece wheels do look as tough as it performs. Wrapped with sticky 245/40 Toyo R888 tires, such setup allows the GSR to put all those horsepowers effectively to the ground. Turning numbers into real breath-taking accelerations. 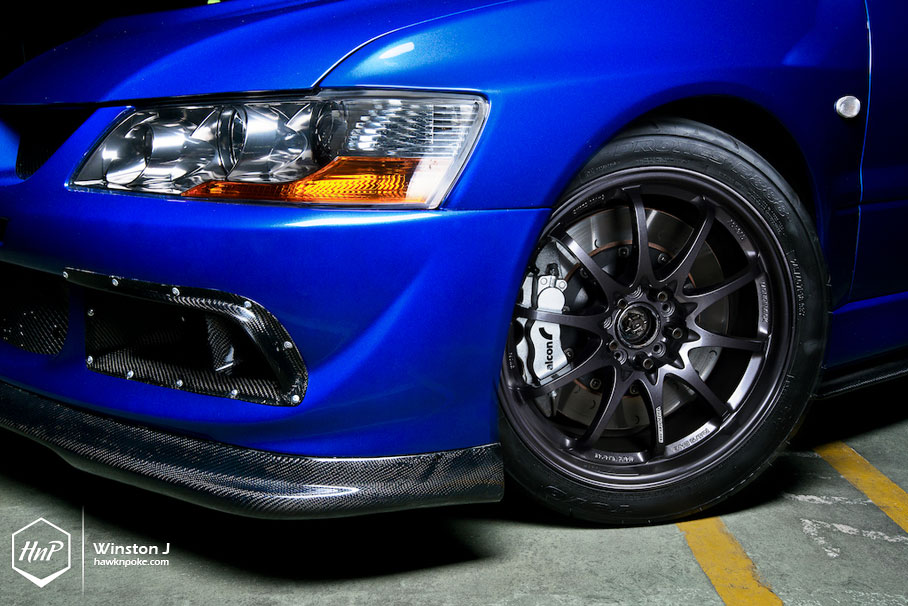 Being an all-around daily driven machine, Didi made sure that every other aspects of the car can keep up with the horsepower increase. Among the supporting mods is this gorgeous set of silver Alcon big brake kit. The 6-pot calipers and 365mm rotors are distinctive and yet very functional in keeping braking distances short. 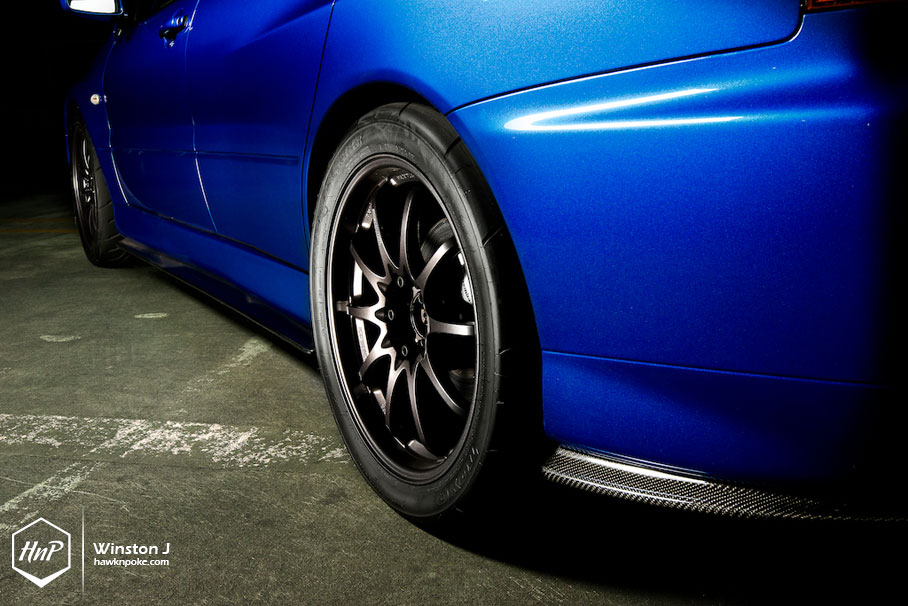 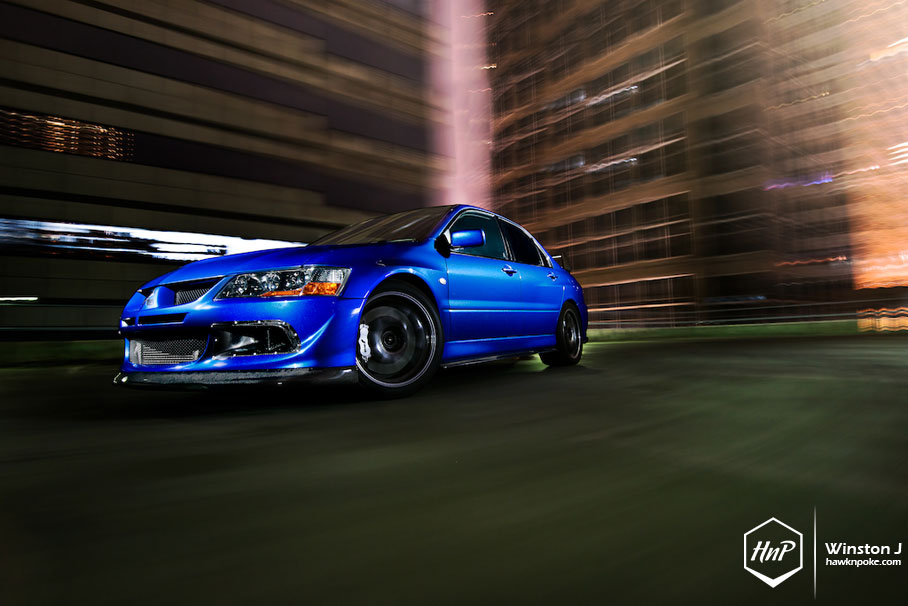 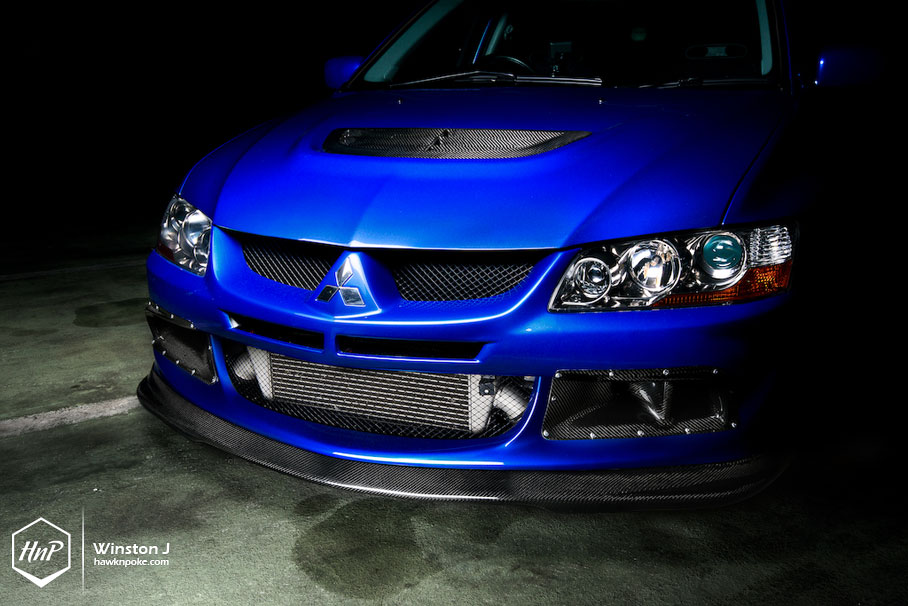 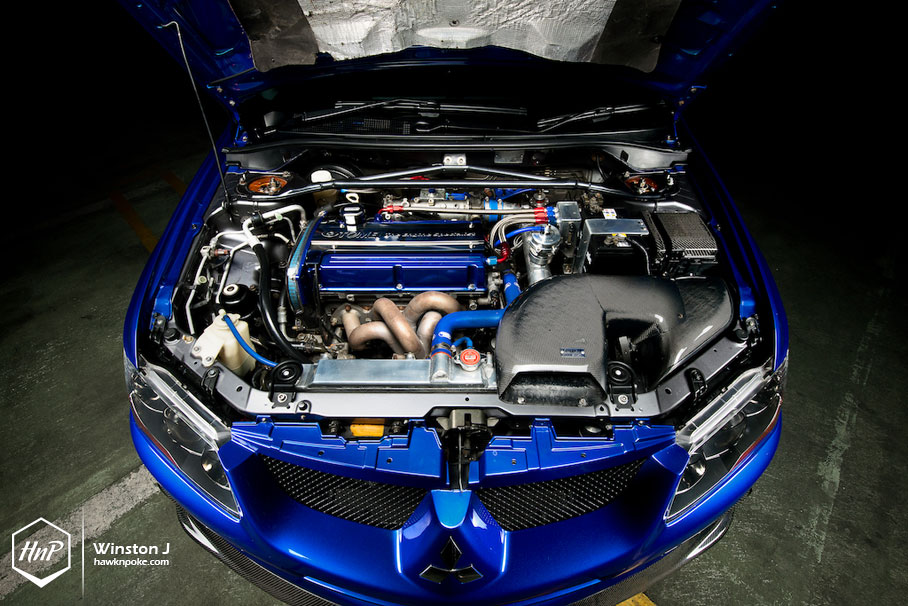 What’s most interesting from this car is the fact that most of the larger mods done are the ones that you can’t really immediately see. From upgraded camshafts to whiteline handling kits, all these have contributed greatly to the Evo’s street performance despite being hidden away under a pile of sleek body panels and seductive carbons. 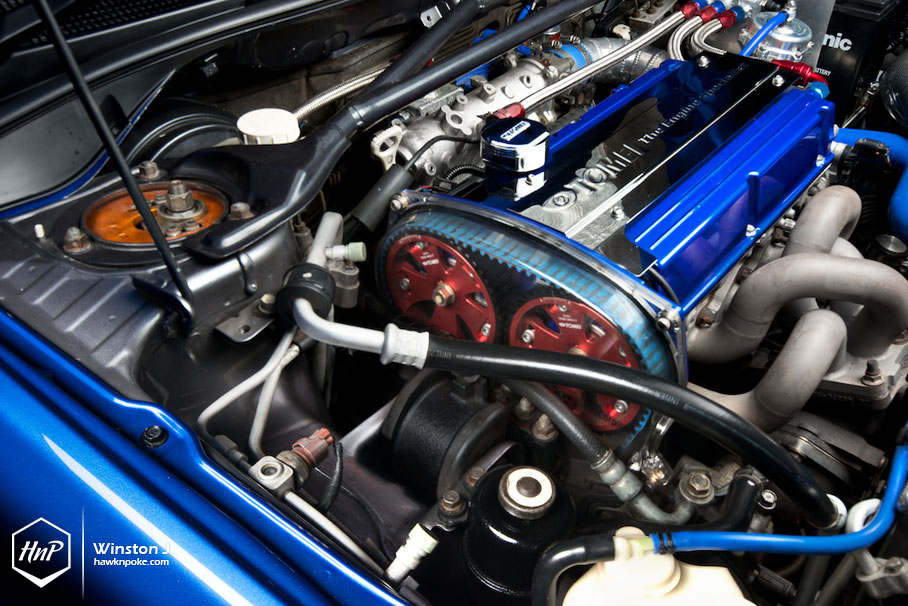 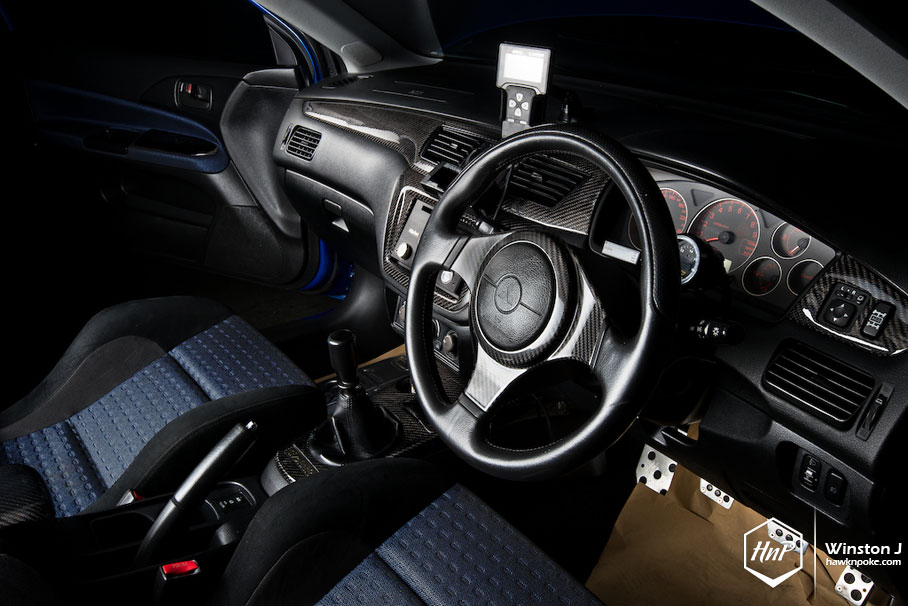 What’s next? Obviously for Didi it’s no other than a turbo upgrade. The kind of mod that will turn the nimble Evo into a manic horsepower churner beast. Hopefully we’ll see that one soon enough.