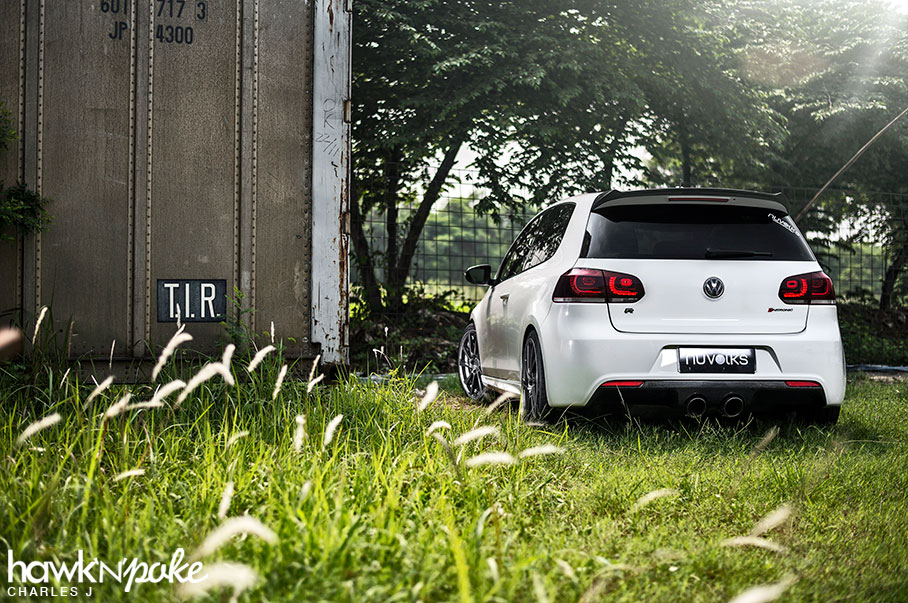 When I was a kid, my passion for cars were greatly fueled by the dreams of one day driving a real Ferrari, NSX, GT-R, Evolution and the like; the legendary rides that appear to be the fastest and sexiest among popular video games and movies. Never in my mind would I’ve thought of myself growing up to becoming a Golf fan. Those born in the 80s-90s must’ve remembered the Golf GTI as being one of the first cars your Need for Speed character can afford as you first started the game. That planted the idea in my mind that the GTI was a cheap slow car that was in no way comparable to the Evolution and the Porsche that can only be unlocked later on within the game. Fast forward to 2012 and the reality has hit me. Yes these hatchbacks’ performance aren’t comparable to those of GT-R and Evolution. Yes they do not look as aggressive as those legendary rides either. But that’s because these Golf’s are within a league of their own. Those video games have never came close to giving you the experience of daily driving these pleasantly functional hatchbacks. Hatchbacks that have successfully synthesized interior comforts on top of responsive performance. I am sure David the owner of this Golf R shares the same passion that I have in regard to these performance hatchbacks. He, however, has taken his Golf R to a whole different level. Wollsdorf-red-lipstick-interior-powered-by-360HP-engine level. 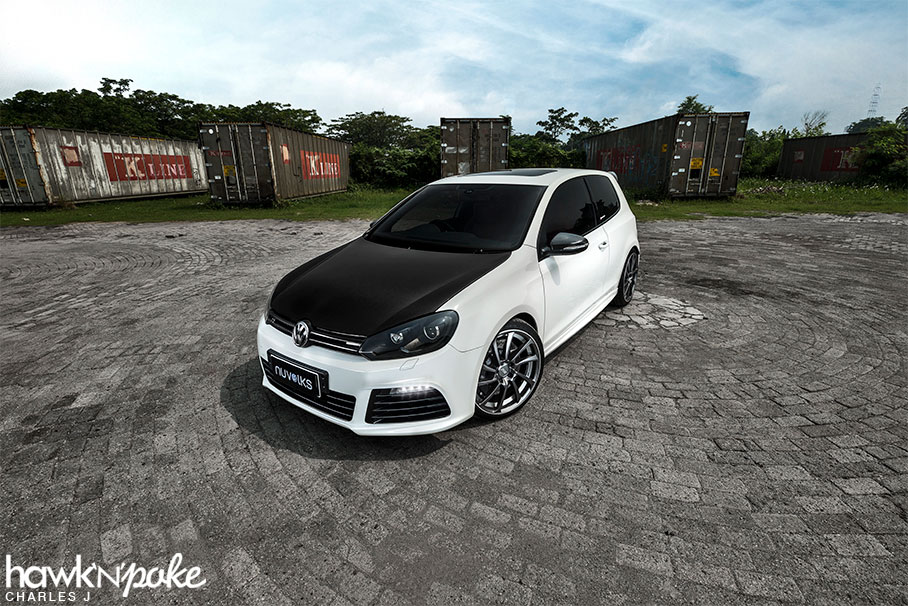 Before I start with the story of David’s R, I should mention that his previous ride was a black GTI. A truly tricked out GTI. It was coupled with plenty of lavish Osir parts and upgraded with an APR K04 turbo kit. Some joked about his GTI modification costs being enough to buy another Volkswagen. Actually that was about right. Then came the time he finally decided that the FWD hatchback simply couldn’t satisfy his apetite anymore. Putting a more than 300HP engine within a GTI will eventually result in higher chance of wheel spins. So, the Golf R is the perfect answer with its AWD system. As excited as a chef trying a new recipe, David has done all these modifications within the car’s 4000KM life. 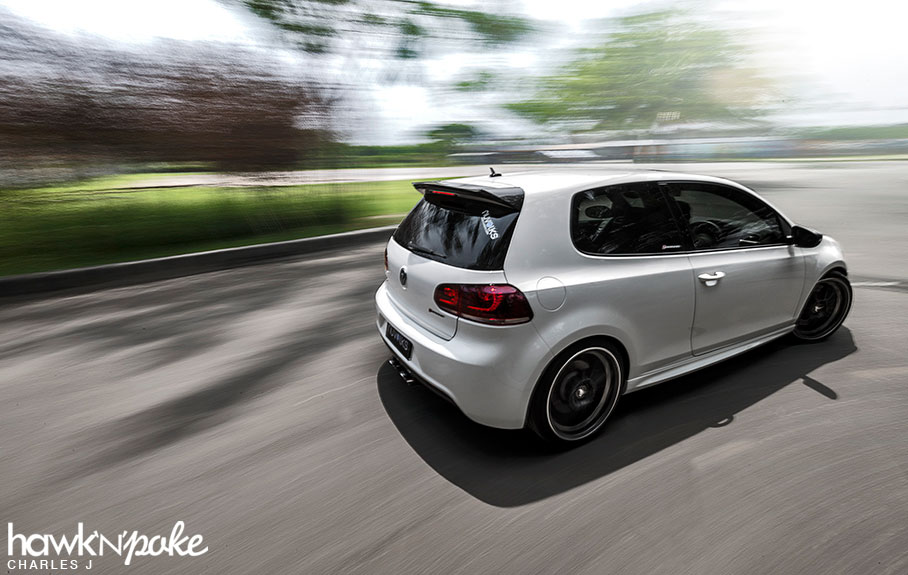 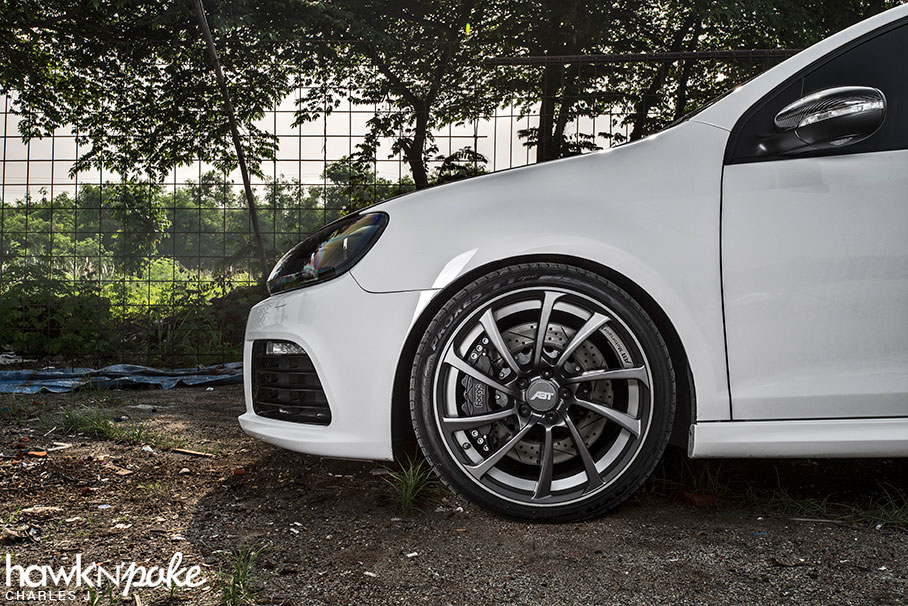 One rule that David always has for his rides is to keep the modifications simple. Simple as in strictly quality bolt-on parts only. He doesn’t go to contests and simply enjoy this R for daily driving. Currently he has installed a set of APR engine parts tuned by Unitronic Stage 2+ file. This results in a 360HP 470TQ performance. Putting it into perspective, a standard Evolution X ‘only’ produces 291HP, and yet the R still has a much better interior and convenience features. Talking about the interior, you must’ve noticed the red Wollsdorf interior. Done by my friend at Vertue, these leathers are of upmost European quality. Never have I thought that the standard R leathers would need upgrading. But looking at this seductive lipstick red leather interior, I am converted. 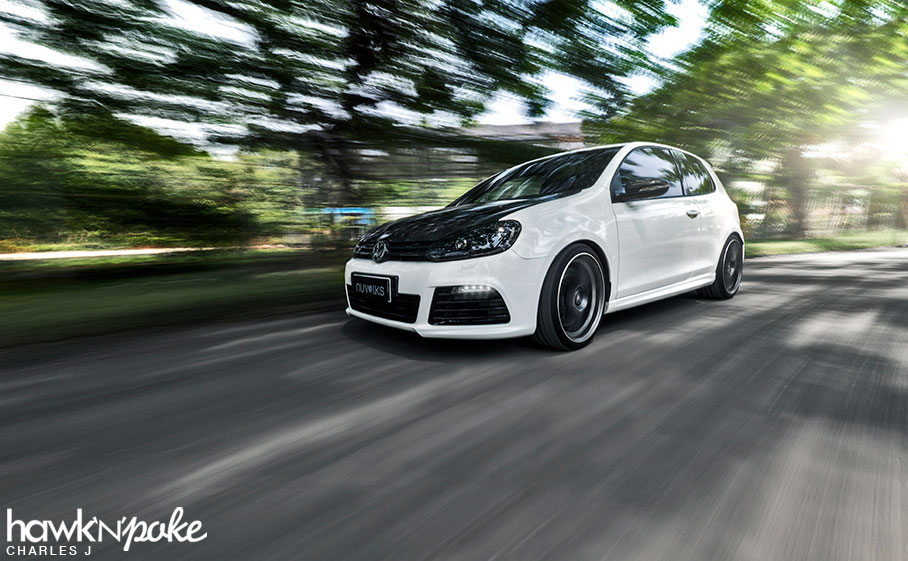 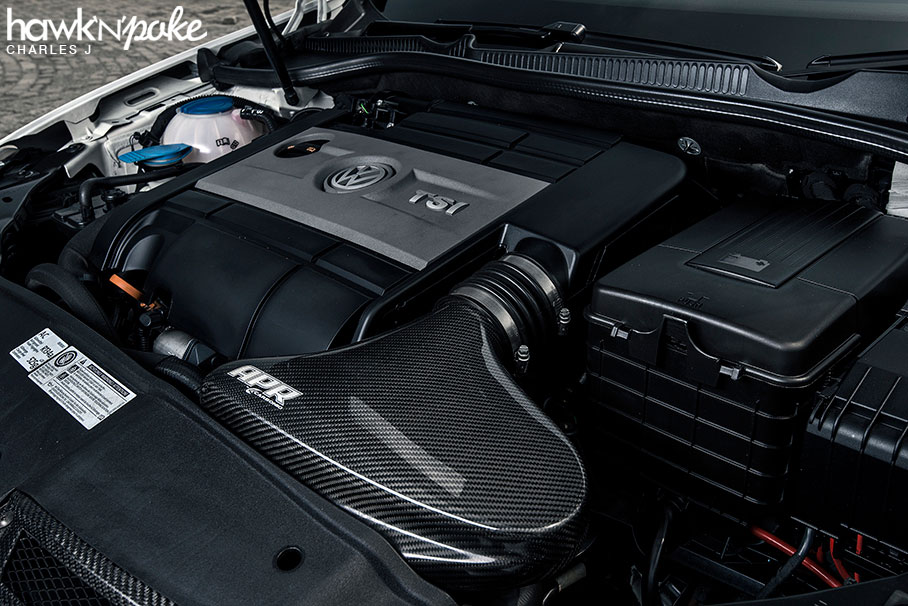 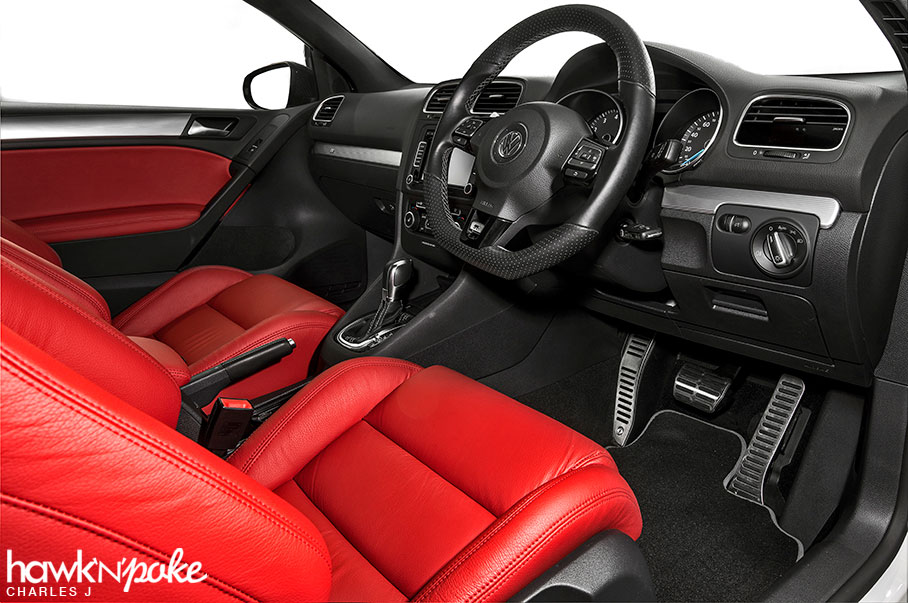 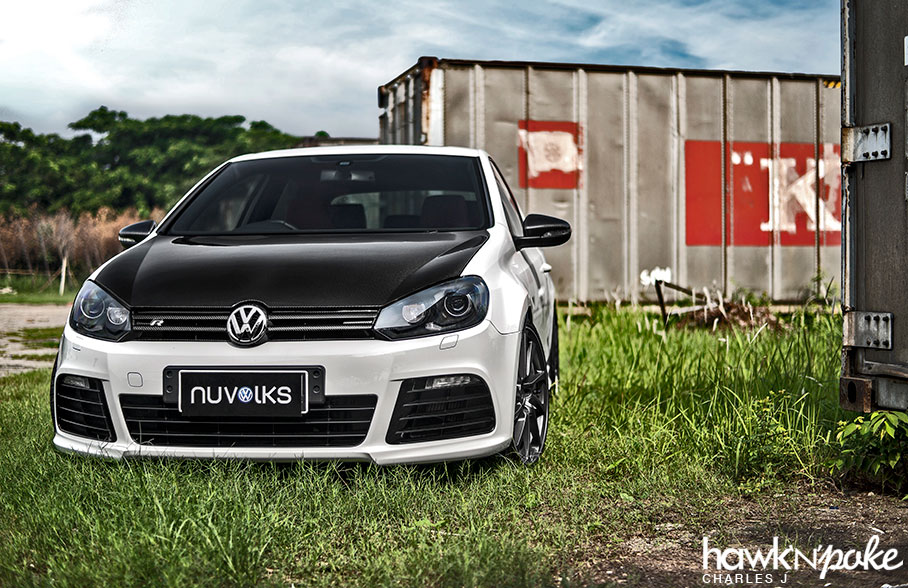 When it comes to the exterior, David is still keeping his faith in Osir carbon parts. Wing, hood and side mirrors are all made out of high quality carbon fibre weave. Further coupled with Revozport’s carbon grill and diffuser, these hightech details have greatly contrasted the Candy White color of the R. A set of gunmetal ABT DR wheels were chosen to replace the conservative Golf R wheels. Even though they are of the same size, these ABT wheels are much more dynamic in design. 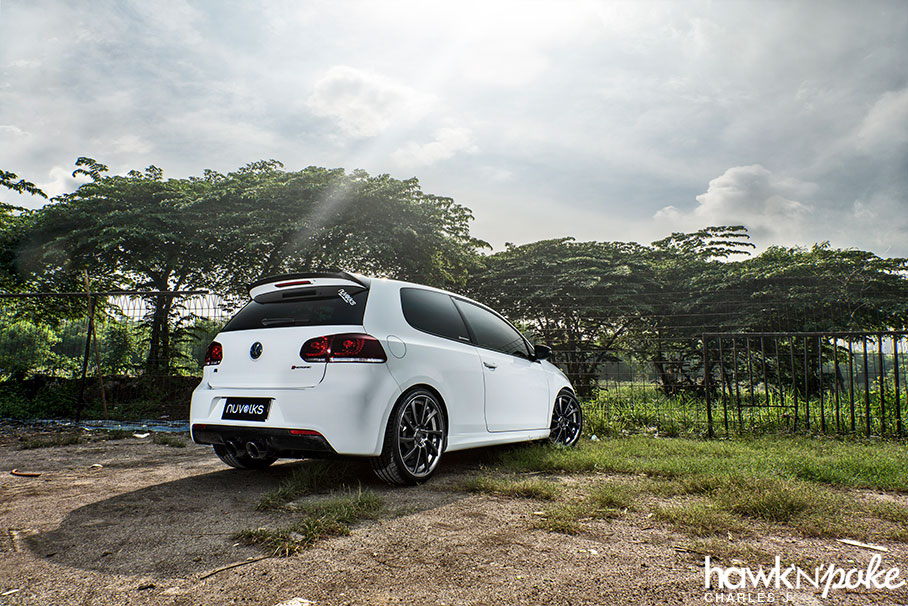 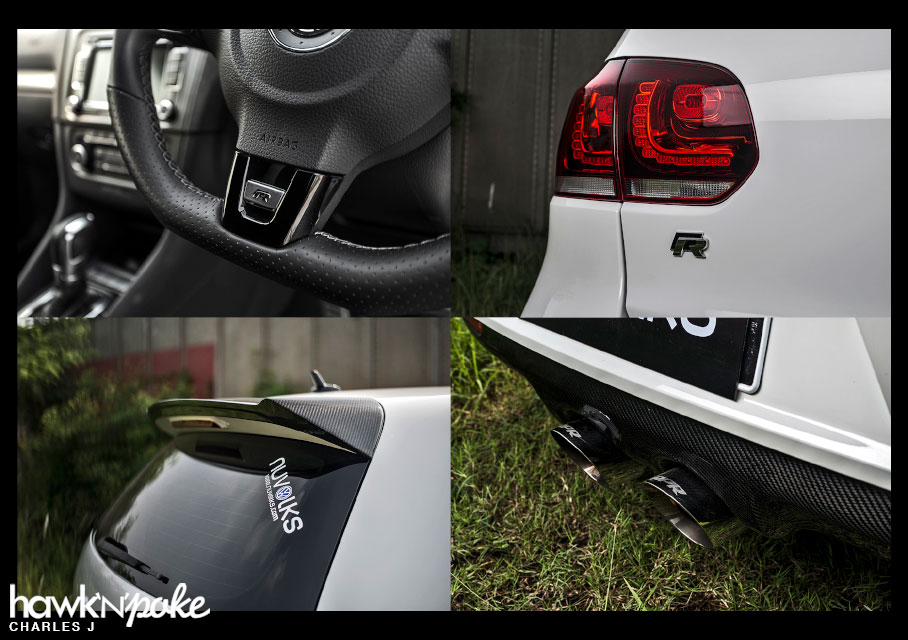 Future projects? Currently only a Revozport carbon front lip is within David’s list, so the ride’s pretty much final. However, word around is that he is having another R waiting to be delivered into his garage.